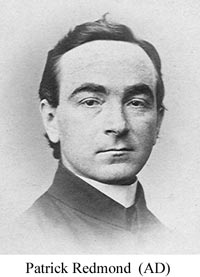 Patrick Redmond was born in Dublin on March 16, 1847. He arrived in Sicklinghall on December 16, 11858 and began his novitiate on December 24. He was sent to Montolivet at the beginning of 1860 to begin a second year of novitiate, according to the decisions of the general chapter in 1856, and to begin his study of theology. He took his vows on December 26, 1860, in the presence of Bishop de Mazenod and he returned to England for health reasons in January1862.In his report of October 1860, Father Antoine Mouchette, moderator of scholastics, wrote: “Redmond: quite a good religious, applies himself zealously to his duties, somewhat rigid in his appearance”. Then, in January 1861 he wrote: “excellent religious, full of good will, excessively shy … hardly dares to speak or act.” He finished his scholasticate in Sicklinghall and was ordained to the priesthood on November 1, 1863 by the bishop of Beverley.

Father Redmond was a member of the community of mission preachers in Inchicore (1864-1867). Missions OMI give his name as the preacher of several parish missions. He also preached retreats to lay people in the Retreat House. It is said of him that he tried in vain to dissuade a group of young men passing through Inchicore on their way to the battle of Tallaght. He was later superior in Leeds from September 16, 1867 until his death on May 22, 1874. On November 6, 1876, Father Horace Pinet wrote to Father Fabre: “A little more that two years ago I succeeded the good Father Redmond whose merits are well known to you. For seven years he fulfilled the office of local superior with great success. Gifted with real talents, he was a more than ordinarily likeable person and truly apostolic. He seemed to exist only to work for the glory of God and the salvation of souls. He had won not only the esteem but also the admiration of all the Catholics and of a goodly number of Protestants in this vast city of Leeds. Unfortunately, premature death took him away from our dear family which he loved as a true Oblate of Mary Immaculate and from the parish which still mourns his loss.” His remains lie in the parish cemetery of Lys Marie in Sicklinghall. Father Dawson speaks of him as one of the Irish priests who have distinguished themselves since the French influence has begun to wane in the Anglo-Irish Province.