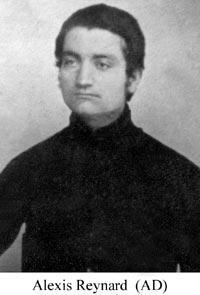 Alexis Reynard was born in Castillon, diocese of Nîmes, on September 28, 1828. He was the third of nine children born to Joseph Reynard, a farmer, and Victoire Dugas. He began his novitiate in Notre-Dame de l’Osier on January 23, 1850. He wished to become a priest but he not been to primary school. Father Jacques Santoni accepted him as a Brother and he judged him rather severely. In February-March, this is what he wrote: “Reynard: not very intelligent; I fear that he will not be able to remain with us; he continues to be very virtuous”. During the summer, the novice master added: “very good conduct, but lacking in intelligence; since he could not be more dedicated and is quite adaptable, we think that we can keep him.”

In November 1850 he was sent to the Calvary house in Marseille where Father Bellon was asking for a Brother. It was there that he made his vows on January 25, 1851 and his final oblation on May 1, 1852 before receiving his obedience for Red River. He left with Fathers René Rémas and Valentin Végréville. He stayed at Saint-Boniface (1852-1853) and Île-à-la-Crosse (1853). He was then at the mission of the Nativity, Chipewyan, near Lake Athabaska, from 1853 to 1863. He undertook all sorts of manual work: building, gardening, cooking etc. and, at the same time, devoted himself to the study of Latin and theology, because he still wanted to be a priest. Bishop Grandin and Bishop de Mazenod were willing to ordain him but Father Faraud and Bishop Taché advised him to remain a Brother because in that capacity he could be more useful. He agreed and that, for him, brought a twofold increase in grace. During this period, Bishops Taché and Grandin, and Fathers Faraud and Clut, all mention in their letters the saintly Brother Alexis.

In 1862, Brother Alexis received his obedience for Providence, on the shores of the Mackenzie River, to the north of Great Slave Lake. There he remained from 1863 to 1870 and he built the house, chapel and convent-orphanage, while looking after the garden and the farm and doing other work at the same time. Afterwards, from 1870 to 1874, he worked at the mission of Notre-Dame des Victoires at Lac-la-Biche, further south. He then returned to the mission of the Nativity from 1874 to 1875.

While travelling to Lac-la-Biche in the company of an Iroquois guide and a young Amerindian girl, he was killed and eaten by his companion. It is thought that he died on June 20, 1875 at House River, a tributary of the Athabaska River. His remains are buried in the Oblate cemetery of Saint-Albert. The inion on his tombstone reads: “Here lie the remains of Brother Alexis Reynard, killed and eaten by his Iroquois guide in defence of an orphan girl who had been committed to his care”.