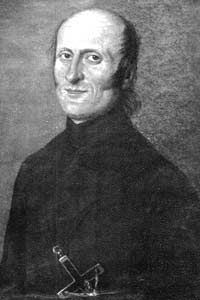 Pascal Ricard was born in Allauch (Bouches-du-Rhône), on May 16, 1805, son of Marie-Anne Michel and Jean-Pierre Ricard, property owner. He met the Oblates during the parish mission preached in his home town November-December of 1824 by Fathers Suzanne, Albini, Jeancard and Marcou. Father Suzanne preached a follow-up mission the following year. When he had completed his classical studies, Pascal began his novitiate at Le Calvaire in Marseilles October 28, 1827 with Father H. Guibert as his Master of Novices. He made his oblation November 1, 1828. He studied theology at the seminary in Marseilles, and then, in the autumn of 1830, in Billens in Switzerland where the novices and the scholastics were sent after the July Revolution. He was ordained to the priesthood in Fribourg, June 21, 1831 by Bishop Peter Tobias Yenni.

Before leaving for Switzerland, on the occasion of the taking of Algiers by the French army, at the beginning of July 1830, Brother Ricard ask the Founder to send him to Algiers as a missionary. Father de Mazenod who was resting in Switzerland at the time, in a July 26 letter to Father Tempier, wrote: “I beg you to tell Brother Ricard that his letter gave me the greatest pleasure; let him be at peace while awaiting God’s good time. The Lord will manifest his will to us when it pleases him, we will do our best to further his plans…” (Letters to the Oblates of France, 1826-1830, Oblate Writings I, vol. 7, no. 349, p. 200-201)

The superior of Billens was Father Vincent Mille. He was younger than Father Ricard, but had been ordained to the priesthood in June of 1830. In the summer of 1831, he requested that Father Ricard be sent to his community as his “right hand man” in teaching the scholastic brothers. At the beginning of 1833, the novices and the scholastic brothers returned to France. A few priests, Father Ricard being one of them, remained in Switzerland as missionaries. At one point in 1837, the Founder thought of recalling him, but he changed his mind. Under the February 25 entry in his Diary, he wrote: “The vacuum created by removing Father Ricard from a community that is so small in number and in an area he knows well and where people know him for several years already would be too much of a shock and would have a negative impact.”

Bishop de Mazenod and Father Tempier visited Switzerland in the summer of 1837 and decided to close that house. The Oblates had just taken on the direction of the shrine of Notre-Dame de Lumières. Father Ricard was sent there as a missionary and he remained there until the beginning of 1847. When, in 1841, this house became a minor seminary as well, Father Ricard was appointed superior, a position he held for six years. In his Notice nécrologique, Father Joseph Fabre wrote: “In 1841, our beloved Father had just established the minor seminary at Notre-Dame de Lumières. His task was that of communicating to a select group of youth from their earliest years love of religious life and more especially love for and the spirit of our cherished family. These children needed a father and a role model. Father Ricard was chosen to do both. He was fully equipped to fulfill this task. Those who have seen him operating amidst this so devoted and docile family can tell you that he was all things to everyone, winning their hearts by his readiness to serve, winning the compliance of their wills by his gentleness and his acts of kindness…”

In Oregon (1847-1857)
At the end of 1846, His Excellency Magloire Blanchet, Bishop of Walla Walla in Oregon, asked Bishop Guigues and Bishop de Mazenod for missionaries. Bishop de Mazenod immediately accepted to send five Oblates with Father Ricard as superior. In a January 8, 1847 letter to Father Ricard, he shared with him his decision in these words: “This is a matter quite remote, my dear Father Ricard, from that of a shed and recreation room for Lumières. You are destined for loftier functions than those of architect or mason. Monseigneur Blanchet, bishop of Walla Walla, brother of the Archbishop of Oregon, wishes to confide his worthy mission to our Congregation. He desires that the Fathers of our society collaborate with him in extending the Kingdom of Jesus Christ throughout the regions entrusted to him. Thanks to this highly favored choice, the work of our Congregation will extend from one sea to the other and we will be deployed so that our communications will stretch from Canada to the United States. The new diocese of Walla Walla is in a very beautiful region wherein the harvest of souls will be very abundant. I must have a man to put in charge of this mission who is mature and experienced and whom I can offer to the new Bishop, already one of our friends, as a dependable and wise religious since, for the time being, our Fathers will make up nearly all his clergy. And for my part I need to confide the direction of our men only to an elder son of the family on whom I can rely entirely since he must be placed at such a great distance from myself with select members from our Society. So there, my dear Father, is where you are called by Divine Providence.” (Letters to North America, 1841-1850, Oblate Writings I, vol. 1, no. 74, p. 147-148)

The missionaries left Marseilles January 22, 1847. Two days later, the Superior General communicated to Bishop Guigues the departure of the missionaries and explained why he chose Father Ricard: “To found the mission of Oregon, a mission so remote and difficult, I needed an alter ego. He had to have virtue, good sense, love of regularity, real attachment to the Congregation and conformity of views and thoughts with the head of the family from whom he would be separated by 3000 leagues, a devout and experienced man, full of the spirit of God, imbued with my spirit, who acts by himself as I myself would act. Only Father Ricard combined all these qualities.” (Letters to North America, 1841-1850, Oblate Writings I, vol. 1, no. 80, p. 160)

Leaving from Le Havre on February 1, the travellers disembarked in New York April 2 after a crossing of 54 days. They arrived in Walla Walla September 5. In the month of July 1848, Father John Viala was pressing the Founder to allow him to leave Limoges because he could not stand the climate. The Founder refused, telling him: “Father Ricard was practically at death’s door when assigned to found the Oregon mission, and yet he put his whole trust in God and now he writes that he has never felt so well, and even without a hair on his head hasn’t caught a single cold, though on long journeys he has had to sleep on the ground and often in the mud.” (Letters to the Oblates of France, 1843-1849, Oblate Writings I, vol. 10, no. p. XXVIII-XXIX)

Father Ricard remained superior of the Oblates of Oregon from 1847 to 1857 and vicar of missions from 1851 to 1857. He founded the mission of Yakima in 1847, was in charge of the missions of British Columbia and Puget Sound and, in 1848, of Saint Joseph of Olympia which was his place of residence. He suffered a great deal because of the authoritarian character of the Bishops Blanchet and their claims to property, the distribution of subsidies from the Propagation of the Faith, etc. In addition to that, the Indian-American war compelled the priests to abandon a few missions. The Founder and Father Casimir Aubert, Secretary General of the Congregation, often wrote to the superior, giving him directions. In 1849-1850, Bishop de Mazenod and the Jesuits suggested that the Congregation of the Propaganda name Father Ricard bishop of Nesqually, the diocese in which most of the Oblates worked and which was administered by His Grace, Norbert Blanchet, Archbishop of Oregon City. It was at this juncture that Bishop Magloire Blanchet was transferred from Walla Walla to Nesqually. In 1853, the diocese of Walla Walla was suppressed and absorbed into the diocese of Nesqually.

In 1857, Father Louis D’herbomez, sent to Oregon in November of 1849, was named visitor extraordinary and superior in Oregon. Father Ricard was recalled to France. The reasons alleged by the Founder were: Father’s Ricard’s state of ill health and as well administration that left something to be desired. In a December 20, 1858 letter to Father Bermond, he wrote: “I have always thought that Father Ricard allowed things to develop too much of their own accord and that he had no economic sense in the management of temporal affairs, and, it seems, very little nerve in spiritual ones.” (Letters to North America, 1851-1860, Oblate Writings I, vol. 2, no. 261, p. 207)

In France from 1857 to 1862
From the time of his return to France, Father Ricard was appointed superior of Notre-Dame de Lumières and remained there until his death. The minor seminary was closed in 1848. It was reopened in 1859 with Fathers Celestin Augier, Joseph Lemoine and Charles Tatin as directors and professors.

Father Ricard took part in the General Chapter celebrated in Paris from December 5 to 8, 1861. Shortly after returning home, on January 6, 1862, he suffered a stroke which left him paralyzed on the left side. He died January 9, 1862, at the age of 56 and 7 months. His remains were laid to rest in the vault of St. Michael’s chapel at Notre-Dame de Lumières.

In the circular letter that announced his death, Father Fabre presented Father Ricard especially as the model religious: “A perfect religious, he lived obedience; he dedicated himself joyfully to all the tasks entrusted to his zeal. In our communities, a refined model of all religious virtues, he showed himself happy to live in and belong to a congregation which he was happy to call his beloved mother. A tireless worker in the missions, he joyfully put to use for the good of souls all the health and talents God had given him. Concerned only for the glory of God and the salvation of souls, he sought only to be forgetful of self and to go unnoticed by others…”