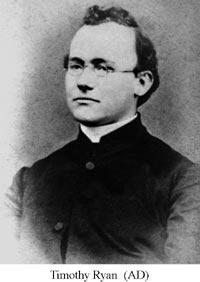 Timothy Ryan was born in Coologe, diocese of Cashel, Ireland, on January 21, 1834. He studied in Saint Jarleth’s, Tuam, and began his novitiate in Notre-Dame de l’Osier on October 8, 1851. He studied rhetoric on his own while following the novitiate exercises. In his report, Father Gustave Richard, found him to be somewhat childish but in his report of December 15, 1851 he says: “that he gives satisfaction and is maturing day by day”. In the months of August-September, the novice master recognized that he “had real virtues” that he gets on well with his confreres but that “he will not be an apostle because he is lacking in energy and zeal.” In October 1852 Timothy Ryan began the study of philosophy and theology in the major seminary of Marseille where he made his vows on December 8, 1852. He remained in Marseille from 1852 to 1855. Father Antoine Mouchette, moderator of scholastics, found that he was “in union with God, diligent in his pious exercises, but tempted by pride and vanity” and “too tenacious in his opinions.” The scholastic went to Sicklinghall to complete his studies and at the same time teach the juniors. During his visit to England, Bishop de Mazenod ordained him to the priesthood on August 9, 1857.

There is no certainty about the exact dates of his various obediences. He was in Leeds (1859?), in Liverpool (1863?), in Ottawa College (1863-1867). It was while he was superior there that the college received its University charter in 1866. Afterwards he returned to Ireland. He was attached to the house in Inchicore and was superior there from 1875 to 1877. He was preaching continually until his death. The author of his necrology note wrote: “His life was a perpetual edification for all his confreres and his example a great encouragement for everybody. Do we need to mention the friendliness of his character and his manner? Within the circle of his influence, he saw it particularly as his duty to maintain the spirit of our beloved Founder and since this is a spirit of charity he fostered that spirit in himself and tried to promote it as much as possible in others.”

Father Ryan died in Inchicore on September 11, 1877 and that is where he is buried.