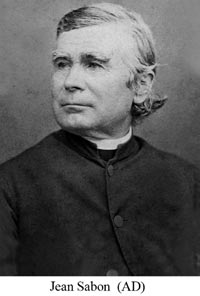 Jean-Baptiste Sabon was born in Rochegude, diocese of Valence, France, on June 17, 1817. He was ordained to the priesthood in Valence on July 6, 1844 and ministered in Grignan. On July 29, 1847 he began his novitiate in Notre-Dame de l’Osier and there he took vows on July 30, 1848. His novice master wrote in 1848: “Sabon seemed to me, in some circumstances, to follow his own will. For the rest, he is a good priest, a good religious, solid in his vocation. He will be an excellent missionary.”

Father Sabon spent some time in Notre-Dame de Lumières (1848-1849) and then in Notre-Dame de Bon Secours. He was a member of the team that went to Algeria in 1849 and then he was assigned to South Africa with Bishop Jean François Allard in November 1851. In 1852 he spent some months in Pietermaritzburg and then founded the mission in Durban. Of the four missionaries who accompanied Bishop Allard, he was the only one to remain faithful to him. Nevertheless, he did suggest that he would leave in 1854-1855. In a letter to Bishop Allard on June 11, 1855, Bishop de Mazenod wrote: “It is painful to see that Father Sabon has given in to his weakness. He has always shown that he is lacking in generosity; he has so little zeal, so little dedication, that this sort of betrayal was to be expected … I give him permission to leave your mission and go to Canada…”

Father Sabon spent his life in Durban where he saw to the building of the house for missionaries, the church and the schools. As co-operators he had Father Monginoux from 1873 to 1874, then Father Alexandre Baudry from 1883 to 1885. From 1883 until his death he was paralysed and suffered from serious loss of memory. Brother Ferdinand Manuel cared for him throughout his illness and was with him at his death on January 13, 1885. He is buried in the Catholic cemetery of Durban.