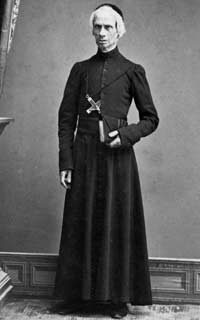 Léon de Saboulin was born in Aix-en-Provence on September 14, 1801, the eldest son of Mr. and Mrs. Armand de Saboulin of Provence nobility. At the age of eight, he lost his father. He made his secondary studies at the college of Aix and later on at the lyceum of Lyon. On May 29, 1814, he was admitted to the confraternity of the Youth of Aix which had been founded the year before by Abbé de Mazenod. Three of his brothers followed his example.

When he had finished his studies, Léon wanted to become a priest, but his fragile health and the assistance he had to provide for his mother prevented him from carrying out this project. He remained unmarried and, after the death of his brothers, took care of his mother until she died. He divided his time between study and charitable works. He published a few works, introduced into the diocese the Society of the Propagation of the Faith and of Saint Francis de Sales. He was a member of the Saint Vincent de Paul Society and had an interest in several other societies.

On December 18, 1852, Bishop J. Darcimoles, the archbishop of Aix, ordained him to the priesthood and on May 26, 1853, Bishop de Mazenod authorized him to begin his novitiate at Aix. On June 15, 1854, he travelled to Marseilles to make his oblation before Bishop de Mazenod. At the May 22, 1854 session of the General Council, he was admitted to vows. In presenting him for vows, Father Courtès bore him “the most favourable testimony concerning his regular conduct and his excellent dispositions.” A few days before his oblation, Bishop de Mazenod wrote to Father Courtès to invite him to come to Marseilles where Father Saboulin had arrived to make his oblation “in a state of extraordinary joy and happiness. We will certainly not have to regret having first of all urged this beautiful soul to the priesthood and then for having facilitated his entry into the Congregation. Independently of his virtues, which will benefit everyone, he will be able to render many small services which others, who enjoy better health than he, would not be capable of doing…” (Oblate Writings I, vol. 11, no. 1210, p. 197)

Father Saboulin always remained in Aix as treasurer of the Oblate house, chaplain to the prisons and confessor in the church of the Mission. He offered especially the example of an intense religious life. In his obituary, Father Augier wrote: “The regularity of his observance was exemplary; he extended the practice and the love of obedience to the point of scrupulosity. His favourite virtue, the one he loved above all others was charity. To prejudice this virtue in conversation or in any other way would cut him to the heart. He had a very special love for the poor and when he was not with them in their dismal hovels, they came to see him at the Mission. […] He did not limit himself to giving them bread to eat; he ministered to their souls and the poor formed a large part of his clientele in the confessional.”