The locality of Saint-Albert is situated about 12 kilometres northwest of Edmonton which is the capital of Alberta, a province which has been part of the Canadian confederation since 1905. It was Bishop Alexandre Taché who chose the site of the mission in 1860. The site is on a hilltop that dominates the valley of the Sturgeon River. Father Albert Lacombe was the founder of the mission and the first resident priest from 1861 to 1864. He had a chapel built and a presbytery. Soon they were surrounded by about twenty Métis families who were attracted by the fertility of the soil. 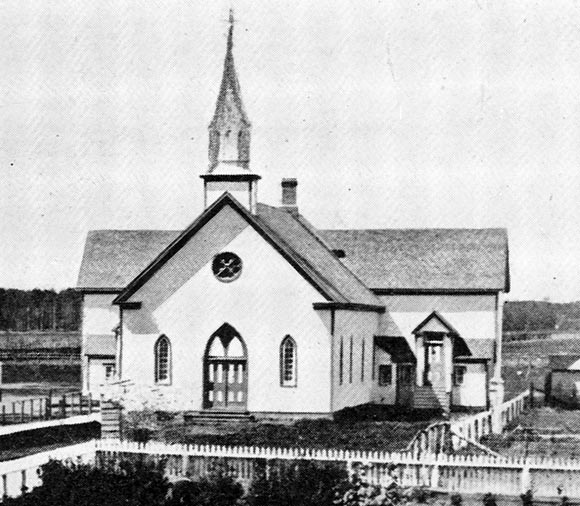 The mission developed rapidly. In 1866 there were already “some fine large buildings … large fields had been cleared, fenced in and cultivated.” There were about forty houses and there was a bridge over the river. In 1868 the parish had about 600 Métis Catholics. Towards 1900 that had become 1,200 and in 1961, about 4,000. In 1879 there was a new church-cathedral, a convent of Sisters and a school (60 children), an orphanage (about 30 children), and a hospital directed by the Sisters of Charity of Montreal who had arrived in 1863. There was a large farm with a flourmill that provided food for priests, Sisters, children and meals for the poor to the extent of two to three thousand meals each year. The priests visited a number of secondary outposts: Lac Lanone, Fort Saskatchewan, Morinville, Rivière-qui-Barre, Stony Plain, Hobbema, and Fort Jasper in the Rockies etc.

In 1868, Saint-Albert became a Vicariate apostolic and a mission vicariate. It became a diocese in 1871 with Bishop Vital Grandin as first Apostolic Vicar and religious superior. In 1912, the diocese became an archdiocese and the see was transferred to Edmonton The mission vicariate underwent a number of changes in the course of the years. In 1921 it became the Oblate Province of Alberta-Saskatchewan, then the Province of Grandin in 1985 and of Lacombe in 2003.

Many Oblates have lived in Saint-Albert, particularly the superiors and pastors, Fathers Hippolyte Leduc and Michel Mérer, each one of whom spent about thirty years there between 1867 and 1918. Brother François Leriche lived there during almost thirty years from 1871 to 1899 and Brother François Boisgontier was there for 50 years, from 1880 to 1930.

Saint-Albert has always been an important Oblate and diocesan centre. Already in 1868, Bishop Grandin founded a novitiate there where thirty novices received their formation between 1868 and 1896. Another novitiate opened in 1935 and continued until 1939. Then, from 1946 to 1968, there was an inter-provincial novitiate for the Provinces of Manitoba and Alberta-Saskatchewan and again from 1882 to 1989. There was a pre-novitiate in Saint-Albert from 1989 to 1999. Already in 1869 Bishop Grandin spoke of a scholasticate-seminary with two scholastics. The question of building a scholasticate came up again in 1890. Holy Family minor seminary was opened in 1900, entrusted to the sons of Mary Immaculate in 1911 and closed in 1913 when it was transferred to Edmonton. The Oblates still have a number of houses or residences in Saint-Albert: Brother Antoine Residence, Foyer Grandin, the parish of Saint-Albert, the Vital Grandin Centre (2 Maple Drive), and the retreat house Star of the North.

There are more than 200 Oblates buried in the town cemetery. The tomb of Venerable Vital Grandin is in the crypt of the parish church that was formerly the cathedral. In 1961 Father Léo Deschâtelets, superior general, presided the celebration of the centenary of the parish. In his address he compared Saint-Albert to Reims, where he had prayed at the tomb of Saint Rémi, first bishop of the Franks, and Fulda, which has the tomb of Saint Boniface, the father of Germanic Christianity. He expressed the wish that one day crowds of pilgrims would come to the tomb of Bishop Grandin in Saint-Albert, which is one of the high places in this part of Canada, and that they would pray there as pilgrims do in Reims and Fulda (Missions OMI, 89 (1962), p. 69).