The diocese
The locality of Saint-Boniface in western Canada originated with the arrival, in 1818, of Fathers Norbert Provencher and Sévère Dumoulin. They had been sent by Bishop J. O. Plessis of Quebec and at the request of Lord Selkirk. In 1819-1820, these priests built a church on the right bank of the Red River.

In 1820 all of western Canada formed one diocese with Quebec. The area was administered by Father Norbert Provencher, who was ordained auxiliary bishop of Quebec on May 22, 1822. On April 16, 1844, the area was raised to be the Vicariate apostolic of Hudson Bay and James Bay, with Bishop Provencher as Apostolic Vicar and titular Bishop of Juliopolis. He had a bishop’s residence built in 1829 and a cathedral between 1829 and 1837. On June 4, 1847, the Vicariate apostolic was raised to the rank of diocese of the Northwest, taking the name of Saint-Boniface in 1851.

Bishop Provencher had only a few priests who remained for very short periods in the diocese. He asked for the help of the Oblates whom he had come to know through the intermediary of Bishop Bourget of Montreal. Bishop de Mazenod accepted his request in spite of the hesitation of Father Bruno Guigues. Father Pierre Aubert and the scholastic Alexandre Taché left Montreal on June 25, 1845, arriving in Saint-Boniface on August 25 after a journey of more than 2,000 kilometres over lakes and rivers.

On June 24, 1850, Father Taché was appointed titular Bishop of Arath and coadjutor of Bishop Provencher. Bishop de Mazenod had not been consulted. He wrote to Bishop Taché on January 19, 1851: “I must not hide from you that the (Red River mission) has been represented to me in such unfavourable colours that I have asked myself whether we should not withdraw our subjects from there.” Therefore he considered this appointment as a sign of Providence that the Oblates should be left there. On June 7, 1853, Bishop Taché became Bishop of Saint-Boniface on the death of Bishop Provencher. On December 11, 1857, Father Vital Grandin was appointed titular bishop of Satala and coadjutor of Bishop Taché with special assignment to the missions of Athabaska-Mackenzie and the Northwest.

When it became a diocese in 1847, Saint-Boniface included all the territories watered by the rivers flowing into Hudson Bay and James Bay. Its southern boundary was the 49th parallel of latitude, while on the west were the Rocky Mountains, on the east the united province of Canada and on the north, the ice-bound polar sea.

Bishop de Mazenod took considerable interest in the missions of the Canadian west. For example, on January 8, 1858, he wrote to Bishop Taché: “I assure you that I take considerable interest in your great mission. I count, so to speak, every step you make. I feel associated with all your works. I share in spirit all your sufferings which I long to alleviate without diminishing your merit.”

Divisions of the diocese
There have been many divisions of the territory since then. In 2004 there were 6 archdioceses and seven dioceses. The first division was on April 8, 1862 when the apostolic Vicariate of Athabaska-Mackenzie was entrusted to Bishop Henri Faraud, o.m.i. Then, in 1868, the Apostolic Vicariate of Saint-Albert was formed with Bishop Vital Grandin as Apostolic Vicar. The diocese was still twice the area of France. Saint-Boniface became an archdiocese on September 22, 1871. Its suffragans were Saint-Albert, now raised to the rank of diocese and the Vicariates apostolic of Athabaska-Mackenzie and British Colombia, which had been created on December 14, 1863.

It was in 1910 and 1915 that the diocese lost most of its territory with the forming of the Vicariate apostolic of Keewatin on March 4, 1910 and Regina on December 4, 1915 and the creation of the archdioceses of Regina in Saskatchewan and especially of Winnipeg in Manitoba. Keewatin included the northern part of the Provinces of Manitoba, Saskatchewan and Ontario. Winnipeg took from Saint-Boniface the best parishes in the south-west of Manitoba, leaving only the poorer parishes to the north of the city and the Indian missions. Of the 60,000 Catholics who had belonged to the diocese, only 15,000 were left, with 24 parishes and chapels and 65 priests. The new archdiocese of Winnipeg received 53 parishes and 118 priests. The periodical Les Cloches de Saint-Boniface described this division as “deeply regrettable”, while Father Servule Dozois, assistant general of the Oblates in Rome, wrote to his brother Joseph, Provincial of the Oblates in Eastern Canada: “Saint-Boniface, formerly the metropolis of the whole of Western Canada, reduced to an insignificant portion of the east of what remained of its territory … In my opinion, Bishop Béliveau, appointed as archbishop, should not have accepted the bare bone he has been given to chew.” Due to pressures coming from Canada, Rome modified this division and gave Saint-Boniface several parishes to the south of the Assiniboine River. The number of Catholics was thus increased to 31,000 while 38,000 remained in Winnipeg.

The bishop’s residence was first built on the arrival of Father Provencher in 1818 and was rebuilt in stone in the period 1829-1838. Having been burned down in 1860, it was rebuilt in 1864-1865. This huge edifice was also the Oblate vicariate and provincial residence until the death of Bishop Langevin, in 1915. Diocesan priests and Oblates who came to the west lived here for a time before being assigned to the parishes and missions. During the episcopacy of Bishop Taché the Oblates living in the residence were always more numerous than the diocesan priests. From 1895 to 1915 there remained only one Oblate priest and one Brother with four or five diocesan clergy.

The Sisters of Charity of Montreal arrived in Saint-Boniface in 1844 and were in charge of the general hospital from 1871 to 1969.

Saint-Boniface has never been an exclusively Oblate diocese, unlike other apostolic Vicariates or dioceses in Canada, but the Oblates have always been numerous as pastors in many parishes, especially in Métis or Amerindian missions. They have also been in charge of a number of works, especially houses for enclosed retreats. On the occasion of the celebrations for the centennial of the arrival of Fathers Provencher and Dumoulin in1818, Archbishop Béliveau wrote: “The Oblates have been, in the strongest sense of the word, the missionaries of the West, and the flourishing churches which were formed in their footsteps, organised under their care, made fruitful through their heroism, cannot be too highly acknowledged! The motto of their Congregation is that of their divine Master: Evangelizare pauperibus misit me. How wonderfully that has been realized here! What could have been poorer in every way than these immense regions of Western Canada! It took apostles with hearts on fire to bring the flame of faith to the icy waters of the Great Lakes in the Northwest and even to the North Pole. No mission in the world was so painful or demanded greater self-denial, a greater love of God or a more heroic charity in the souls of the missionaries.

The mission vicariate
The religious vicariate of Saint-Boniface, originally called Red River, was erected on April 24, 1851, with Bishop-elect Taché as religious superior. The territory covered the extent of the diocese but also included the area beyond the Rocky Mountains as far as the Pacific Ocean. As yet, there were only two communities: the bishop’s residence in Saint-Boniface and Île-à-la-Crosse. There were about twelve Fathers or Brothers, among whom were Father Pierre Aubert and Bishop Alexandre Taché who had arrived in the west on August 25, 1845.

At the beginning, Bishop de Mazenod sent missionaries every year and so the vicariate developed rapidly. When the Founder died in 1861, the vicariate had eight missions with resident Fathers and Brothers. There were thirty Oblates of whom two were bishops: Alexander Taché and Vital Grandin who, on December 11, 1857, had been appointed coadjutor to Bishop Taché and responsible for the northern part of the vicariate. There were missions or residences in Île-à-la-Crosse, Lac-Sainte-Anne, Lac-la-Biche, Lake Athabaska, Great Slave Lake, Good Hope, Lake Caribou, and of course the residence in Saint-Albert from which the missionaries visited the stations at Saint-Charles, Saint-Laurent and Saint-Norbert (see these titles).

Division of the mission vicariate
The first division took place on November 30, 1864 with the erection of the religious vicariate of Athabaska-Mackenzie, on the territory of the Apostolic Vicariate of the same name, which had been erected on April 8, 1862. A second division came on March 20, 1868. The region of the plains in the west became the religious vicariate of Saskatchewan, shortly after to be called Saint-Albert when Bishop Vital Grandin was appointed the first superior. Afterwards, the Canadian west and north were divided into different Oblate religious vicariates and Provinces. The highest point was reached in 1973 with five Provinces and six mission vicariates in the west. Since 2003, however, there are only the two Provinces of Lacombe and Assumption.

On October 5, 1904, the mission vicariate of Saint-Boniface was made a Province with the title of Province of Manitoba. It extended over almost the whole of the civil province of Manitoba, the southern part of Saskatchewan, the western part of Ontario and some missions in the state of Minnesota in the United States. There were 70 Oblates, 22 houses or residences and they served more than 100 parishes or missions.

On June 21, 1911 the mission vicariate of Keewatin was erected in the north of Manitoba with Bishop Ovide Charlebois as religious superior. Two missions of the Province became part of Keewatin: Cross Lake and Norway House. In 1915, when the diocese of Winnipeg was erected, the Province ceded to the new diocese the important parish of Sainte-Marie in Winnipeg and that of Saint-Charles. In 1924, nineteen German speaking Oblates were assigned to the new Vice-Province of Saint Henry in Belleville, U.S.A. Again, in 1926, fourteen German or Polish speaking Oblates and twelve residences were given to the new Oblate Province of Saint Mary, Saskatoon.

Works and missions
The Province had a juniorate, dedicated to the Holy Family, in Saint-Boniface from 1905 to 1968. The novitiate, under the title of Mary Immaculate, was in Saint-Laurent from 1888 to 1897 and in Saint-Charles from 1898 to 1909. It was in the juniorate from 1909 to 1924, in Saint-Laurent from 1924 to 1950, and in Saint Norbert and Lebret from 1950 to 1968. There was a scholasticate, dedicated to the Sacred Heart, in Lebret from 1927 to 1966 and in Saint-Norbert in 1966-1967. The house for enclosed retreats, Notre-Dame du Cénacle, was in Saint-Boniface from 1946 to 1960 and in Saint Norbert thereafter. The Fathers of the Province were responsible for the college in Saint-Boniface for many years and for that of Gravelbourg from 1918 to 1967. They were also responsible for the de Mazenod major seminary in Gravelbourg from 1931 to 1946 and for the Saint-Boniface major seminary in Saint Norbert in the period 1946-1948. During the past 30 years the Province has sent missionaries to Bolivia, Chile, Guatemala, Lesotho etc. 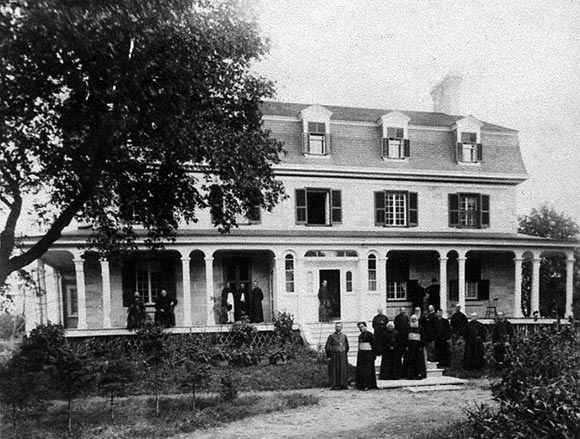 In 1908 the Catholic printing works, West Canada Publishing Company was founded in Winnipeg. In 1921 it was publishing five weekly newspapers: two in French, one in English, one in German, and one in Polish. The diocese published Les Cloches de Saint-Boniface and the Oblate Province had two bulletins: L’Ami du Foyer (juniorate publication) from 1905 to 1968 and My Brother and I (in English and in French) from 1968 to 2005.