The first Oblate community settled in Saint-Hilaire, province of Quebec, in 1841. There had been a meeting in Marseilles on Sunday, June 20, 1841, between Bishop Ignace Bourget of Montreal and Bishop Eugene de Mazenod, Founder of the Missionary Oblates of Mary Immaculate and the outcome of that meeting was that six Oblates were sent to Canada. Father Jean-Baptiste Honorat was chosen as superior of this first Oblate community in Canada. His companions were: Fathers Adrien Telmon, Jean Baudrand, Lucien Lagier and the Brothers Basile Fastray and Louis Roux. Having sailed from Le Havre, they arrived in New York, aboard the ship Utica on November 25, 1841 and they knocked on the door of the bishop’s house in Montreal on Thursday, December 2. They were welcomed by the young priest, Father Damase Dandurand, secretary to the bishop. This young priest was to become the first Canadian Oblate the following year.

Bishop Bourget assigned the Oblates to Saint-Hilaire. The records of this mission opened in 1799. The parish was erected canonically on February 24, 1827 and the first pastor, Father Jacques Odelin was appointed in 1831. He died in office on June 9, 1841. On December 7, 1841 the Oblates arrived in the parish, which is about thirty-five kilometres east of Montreal, at the foot of a hill, which bears the same name. It is on the eastern shore of the River Richelieu. As well as the parish, Bishop Bourget put the Oblates in charge of the pilgrimage shrine of Mount Saint-Hilaire. A huge cross, about thirty metres in height, had been erected on the summit of the hill. It was blessed on October 6, 1841. On that occasion, Bishop Charles de Forbin-Janson, who was visiting the Americas at that time, preached to a crowd of about 15.000.

The first mission preached by the Oblates in Saint-Hilaire was held from December 12 to 25, just a few days after their arrival. They went to Saint Vincent de Paul for the second mission from December 23 to January 6. Another mission was given in Beloeil from December 2 to January 26. Afterwards the Oblates preached in Boucherville, in the eastern area and in Saint-Denis-sur-Richelieu. From March 14 to April 5, 1842, Fathers Honorat, Lagier, Baudrand and the novice, Dandurand, gave a mission in Longueuil. 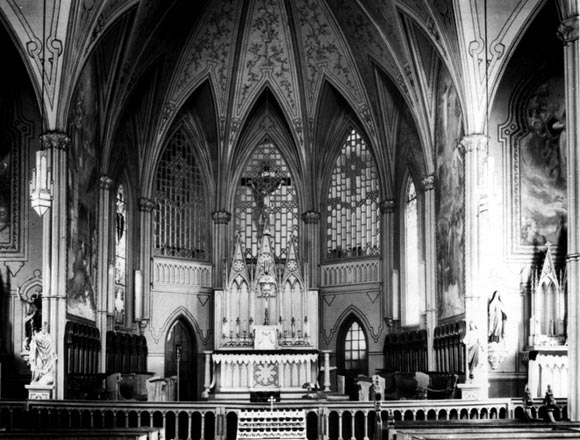 Saint-Hilaire, QC, Inside the Church (AD)

The first novitiate in Canada was established in Saint-Hilaire and the first novice was the young Father Damase Dandurand. Louis Riel began his novitiate on June 3, 1842 as a coadjutor Brother. He left shortly afterwards. On January 21, 1844 he married Julie Lagemodière. Their son, Louis, born on October 22, 1844, became the famous defender of the rights of Métis in Western Canada. Apart from these two, there were no other novices in Saint-Hilaire.

The Oblates left Saint-Hilaire for Longueuil in August 1842. Father Lucien Lagier continued his ministry in he parish until May 1843. The altar on which the Oblates celebrated Mass is still preserved in the sacristy of the parish church.