The Parish of Saint-Hilaire on the Richelieu, Canada’s first Oblate community. When the first six Oblates arrived in Montreal on December 2, 1841, Bishop Ignace Bourget entrusted them with the parish of Saint-Hilaire on the Richelieu River as their first home. It is therefore important to write a few words about this place, whether or not it was a canonical residence. It was only a year later that, wishing to get closer to Montreal, they left that place and went to Longueuil where they stayed until 1848 when, at Bishop Bourget’s instigation, they settled in Montreal in a poor neighborhood called the Faubourg Sainte-Marie. There they opened a public chapel dedicated to Saint Peter, the apostle. This establishment would become the central home of the Oblates in Eastern Canada. 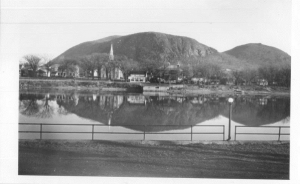 Let us return to the Saint-Hilaire Mission. It was founded on December 21, 1795, almost fifty years before the Oblates arrived in Canada. A presbytery-chapel was immediately built with a room on the ground floor and a chapel with 34 paying benches on the second floor. Canonically erected on February 24, 1827, the architect and builder, Augustin Leblanc, and master mason Joseph Doyon began building the church in 1830. Although unfinished, they opened it for worship in the fall of 1837. Antoine Provost, from Beloeil, made the vault in 1842. Its first priest was appointed in 1831 in the person of Father Jacques Odelin who died in office on June 9, 1841.

The beautiful lines of the original fieldstone presbytery and gable roof were altered in 1890 by the addition of a rusticated stone paneling and a four-sided gambrel roof. Several projects were carried out in the church under the direction of Father Octave Monet (1851-1856). The Lord of Rouville, Thomas-Edmund Campbell, offered the priest the services of his architect, Frederic Lawford, who designed the vault, the choir, the altars and the sacristy according to his plans.

In 1853, the carpenter, Toussaint Guillot, added a balcony with 46 benches. That same year, a covered path to the sacristy was built and the Vestry contracted the master carpenters Félix Martin and Joachim Authier in 1856 to complete the interior of the church.

In 1882, the Vestry acquired a Casavant organ built in 1856 for the Saint-Hyacinthe seminary. It is the oldest Casavant organ still in service. The famous Canadian painter, Ozias Leduc, a son of the parish, decorated the church in 1898. His work includes fifteen large wall paintings on marouflaged sheet metal and stenciled adornments on the vaults and walls. The paintings represent the seven sacraments, the four evangelists, the mysteries of the Nativity and the Ascension of Christ, the Assumption of the Blessed Virgin and the patron saint of the parish, Saint Hilaire de Pothier writing his treatise on the Holy Trinity.

The church of Saint-Hilaire has been classified as a historical monument since 1965, while Osias Leduc’s paintings have been recognized as cultural property since 1976.

The Parish of Saint-Hilaire and the Oblates

The first Oblate community arrived in Montreal on December 2, 1841. A meeting in Marseilles on Sunday, June 20, 1841, between Bishop Ignace Bourget of Montreal and Bishop Eugene de Mazenod, founder of the Oblates, resulted in the sending of six Oblates. The Bishop of Marseilles chose Father Jean-Baptiste Honorat as Superior of this first Canadian Oblate community. His companions were Fathers Adrien Telmon, Jean Baudrand, Lucien Lagier, and brothers Basile Fastray and Louis Roux. Arriving in New York from Le Havre on the Utica on November 25, 1841, these Oblates knocked on the door of the bishop’s house in Montreal on Thursday, December 2. The young priest, Damase Dandurand, the bishop’s secretary, welcomed them.

Bishop Bourget set up the Oblates at Saint-Hilaire. The registers of this mission opened in 1799. The parish was canonically erected on February 24, 1827. As mentioned above, the first parish priest, Jacques Odelin, died in office on June 9, 1841. On December 7, 1841, the Oblates went to this parish, located some thirty-five kilometers east of Montreal, at the foot of the mountain with the same name, on the east side of the Richelieu River. 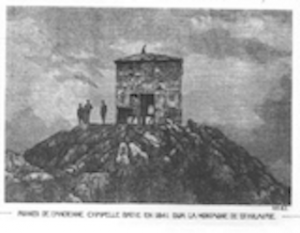 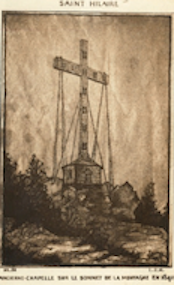 In addition to the responsibility of the parish, Bishop Bourget entrusted them with the pilgrimage place on Mont Saint-Hilaire. A huge cross about thirty meters high, blessed on October 6, 1841, dominates the top of the mountain. At that time, Bishop Charles de Forbin-Janson, Bishop de Mazenod’s friend, was on tour in America and preached to an estimated crowd of 15,000 people.

From March 14 to April 5, 1842, Fathers Honorat, Baudrand, Lagier and Dandurand, the first Oblate novice, gave a mission in Longueuil. The Oblates established their first Canadian novitiate in Saint-Hilaire. Father Damase Dandurand was the first novice. The second, Louis Riel, who had begun on June 3, 1842 as an assistant brother, left shortly afterwards and married Julie Lagemodière. Their eldest son, Louis, born on October 22, 1844, became the famous defender of Métis rights in Western Canada. 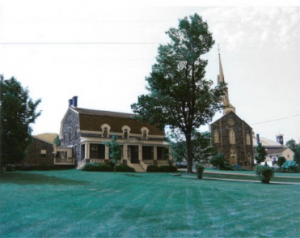 They were the only two novices to begin their novitiate in Saint-Hilaire. The Oblates left Saint-Hilaire to settle in Longueuil in August 1848. But Father Lucien Lagier was in charge of the parish until May 1842. The altar on which the Oblates celebrated Mass still exists and is kept in the parish sacristy.