Saint-Laurent is a small village in the Alpes de Haute-Provence. The manor, called a hunting lodge in Provence, was built between 1600 and 1610. It was surrounded by a rural property of more than three hundred hectares belonging to one single tenant. The lord of the manor received a large part of the revenue from the crops grown in his domain. Alexandre Mazenod was able to purchase this property thanks to a gift from his sister Jeanne who had received an inheritence from her husband on his death in 1730. He bought it from the joint lords of Saint Laurent. On February 10, 1741, Charles-Alexandre Mazenod, the Oblate Founder’s grandfather, obtained by a letter from the king the position of President of the Courts of Accounts, Aids and Finances of Provence. He also became a member of the nobility of the cloth. As a result, he was recognized as a fiefed noble, that is, a noble whose title was attached to some land holdings. Mr. de Mazenod was lord of Saint-Laurent. In other words, Saint-Laurent was the title of nobility of Charles-Alexandre de Mazenod, that is, his fiefdom. In 1486, king Charles VIII confirmed the privileges of the fiefed nobility. As a result, they took precedence over other members of their class. After a great deal of bickering, these privileges were suppressed by king Louis XVI in preparation for the Estates General of 1789. All the nobles, fiefed and non-fiefed, then had equal voting power. This decision on the part of the king produced strong opposition. The fiefed nobles organized a delegation to the king, a delegation which was never received by the king. Charles Antoine de Mazenod, the Founder’s father, drew up a memoir opposing the king’s decision. (see LEFLON, I, 1961, New York, trans. Francis D. Flanagan, o.m.i., p. 49-62) These events, which nowadays are of interest to almost nobody, shed some light on the mentality in which Eugene was raised. His father was an example of an individual very much attached to his privileges. It was only the power of God’s grace that could transform this son of a nobleman, defending his privileges tooth and nail, into the missionary who despoiled himself to follow Jesus Christ. 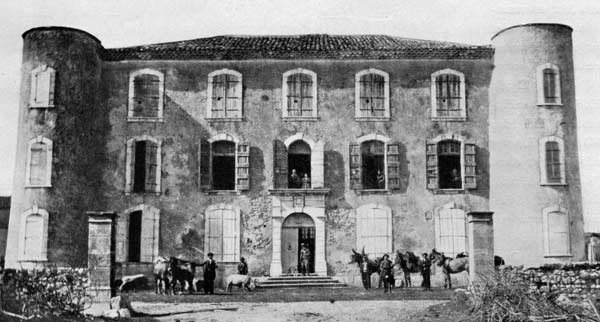 After the Revolution, Mrs. Joannis-Bonnet, Mr. de Mazenod’s mother-in-law, succeeded in recovering the property that had been confiscated by the government of the Revolution in its movement to confiscate all properties belonging to the nobility. Mrs. Joannis had bought back the Mazenod lands through the intermediary of a friend, Sextius Julien who later would sell it back to Mrs. de Mazenod. After much negotiation, Mrs. de Mazenod reacquired the property that had been a part of her fortune and that of her husband.

When Eugene returned from exile, he was not immediately able to enjoy the delights of the city of Aix because he had military conscription hanging over his head. There was a real possibility of him being drafted if his name came up in the lottery. To escape this fate, he had the option of paying for a replacement. As a result, Mrs. de Mazenod sent her son to Saint Laurent because the cost of finding a replacement in a small village would not be as high as it would be in a city like Aix. Eugene, therefore, went to spend five months at Saint Laurent while waiting for the census to take place. For him, it was a time of depressing boredom compared to the worldly life he had lived in Sicily. He wrote to his father: “I have left that hateful solitude after five months of exile; they seemed more like five centuries.” (LEFLON, I, 1961, New York, trans. Francis D. Flanagan, o.m.i., p. 244)

Nevertheless, he would return to Saint-Laurent. From September 1 to 16, 1818, along with Noël François Moreau and Marius Suzanne, he was at Saint Laurent in order to make the first draft of the Rule. (see LEFLON, II, 1961, New York, trans. Francis D. Flanagan, o.m.i., p. 153-170) Even if he did appreciate the serenity of Saint-Laurent, Eugene de Mazenod thought that his family should divest themselves of this property. That is what he repeats in the letters he sent to his mother when he was in the seminary. For example, “I can assure you that I was attaching no more importance to Saint-Laurent than to any other property.” (Oblate Writings I, vol. 14, no. 47, p. 105) And “…any more to the land at St. Laurent which I would have liked to see already sold…” (Oblate Writings I, vol. 14, no. 55, p. 124) If he tells his mother to bring back the chalice from Saint-Laurent, it is because he no longer has any intention of celebrating Mass there. And yet, he maintains a certain attachment for that property. When he was bishop of Marseilles, he made a financial contribution to having the parish church restored, a fact to which a plaque on the wall of the church testifies. We notice in a footnote to one of his letters to his mother: He also mentions “Projects to enhance the value of the land at Saint-Laurent.” ((Oblate Writings I, vol. 14, no. 27, p. 55-57)

This house subsequently saw a series of owners. It holds a two-fold memory for us: that of the pomp and pride of the Mazenod family, a glory that did not last; and the memory of the recollection of Saint Eugene who, in the serenity of the countryside, drew up the first Rule. From that time on, this is the Rule that has breathed life into the missionary zeal of the Oblates.