Sisters of the Holy Family of Bordeaux 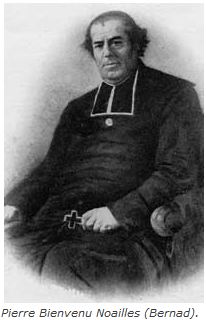 The Sisters of the Holy Family of Bordeaux were founded in 1820 under the title of Association of the Holy Family by Abbé Pierre Bienvenu Noailles.
Pierre Bienvenu was born in Bordeaux on October 27, 1793. After living a youth that bore the stamp of instability and frivolity, little by little he found his way back to the right path about the age of 17. He made his First Holy Communion in 1813 at twenty years of age and entered the seminary of Saint Sulpice in Paris in 1816. After his ordination to the priesthood on June 5, 1819, he worked as assistant priest at the parish of Saint Eulalia. While zealously carrying out his ordinary ministry as assistant priest, he involved himself in working with movements. It was in this line of apostolate that he found his vocation: to found an association under the patronage of the Holy Family to undertake all the works of mercy and which would be an umbrella organization for priests, religious and laity. This became his life’s work. Upon his death in 1861, the nine female branches of his organization counted 1500 religious women distributed in 223 houses in France, in Spain, in Italy and in Algeria. Some 20,000 lay people were associates.

In order to remain faithful to his founding vision and to ensure that the religious women would be provided with a uniform consistent spiritual direction, he attempted unsuccessfully to found a congregation of priests: the Poor Priests (1822-1826) and the Priest Auxiliaries (1833-1840). He then decided to affiliate his association to a congregation of religious. His negotiations with the Brothers of Saint Anthony did not succeed in 1847-1848; nor were his attempts to affiliate with the Jesuits in 1850, the Dominicans in 1856-1857 and the Missionaries of Calvary of Toulouse in 1857 any more successful.

Affiliation with the Oblates of Mary Immaculate in 1857-1858
In 1853, a community of Oblates was established at the shrine of Notre-Dame de Talence near Bordeaux. In November of 1856, Fathers Delpeuch and Duclos preached a mission in Martillac. It was on that occasion that they met Mother Suzanne Machet who was at the Solitude. They resolved to form a pact of prayer and merit between the Oblates and the Holy Family. It was on this occasion that Pierre Bienvenu made Father Delpeuch’s acquaintance and they became friends.

In the summer of 1857, no doubt after having perceived the difficulties that an affiliation with the Missionaries of Calvary would present, he shared with Father Delpeuch his desire to affiliate with the Oblates. It had not escaped his notice that the goals of this society corresponded very closely to those he himself had wanted for the Poor Priests in 1822: continuation of the work of the Apostles, being at the service of the bishops, preaching of parish missions, love of the poor, devotion to Mary. Father Delpeuch told Abbé Noailles that he himself would never obtain this from Bishop de Mazenod, the Founder of the Oblates. Only one person could convince the Bishop of Marseilles to accept this idea: the archbishop of Tours: “If Bishop Guibert takes your interests in hand, he will lead our beloved father to give his consent.”

Bishop Hippolyte Guibert was one of Bishop de Mazenod’s favorite sons and a man he felt he could trust. Pierre Bienvenu knew him well also because he had some branches of his work in Tours. He paid him a visit and obtained his support. Bishop de Mazenod visited the Oblates in England in the course of the summer of 1857. Upon his return, shortly after August 15, he stopped in at Tours and Bishop Guibert shared with him the wishes of the Good Father. Bishop de Mazenod promised to take an interest in this project and to talk to his council about it as soon as he arrived in Marseilles. But, instead of returning directly home as had been foreseen, he immediately went to Bordeaux where he stopped over from August 28 to 31 and he called two of his assistants there. The affiliation was practically a fait accompli. During the autumn, the project was fine-tuned, between the two cities and with the archbishop of Bordeaux as intermediary. The agreement was signed on the 11 and 14 of January.

According to the affiliation agreement, the director general took part in the government of the association. On July 24, 1902, the Congregation of Bishops and Regulars approved, not the association, but the Sisters of the Holy Family. The branches were reduced to three with the addition of the contemplative branches. The Oblates remained chaplains and counsellors without jurisdiction in the external forum. The superior general of the Oblates kept the title of director general.

In 1958, the centenary of this affiliation was celebrated in Rome and in Talence. In the course of this century, the congregation of the Oblates like that of the Sisters had seen considerable growth. The Sisters numbered more than 5,000 members in thirteen countries. They followed the Oblates to Ceylon in 1862, to Lesotho in 1864, to Natal in 1865 and to Canada in 1901. The affiliation came to an end during Vatican II. Relations remained cordial between the members of the two congregations. Oblates still occasionally preach retreats to the religious sisters.