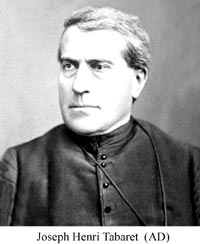 Joseph Henri Tabaret studied in the boarding school in Bourg-de-Péage before entering the Oblate novitiate in Notre-Dame de l’Osier on September 13, 1845; he made his vows on September 14, 1846 and then continued his ecclesiastical studies in Marseilles, in Notre-Dame de l’Osier and in Notre-Dame de Lumières, Vaucluse. In 1850, on medical advice, he left for Upper Canada and was ordained to the priesthood in Bytown (Ottawa) by Bishop Bruno Guigues on December 21. Father Tabaret began his apostolate in L’Orignal which at that time included a number of missions: Alfred, Vankleek Hill, Hawkesbury in Upper Canada, and Grenville, Bonsecours (Montebello) and Sainte-Angélique (Papineauville) in Lower Canada. This ministry lasted from 1851 to 1853 and had a profound influence on him. Tabaret was a man with great ideas and he integrated quickly into his new milieu. His work among the Scottish, Irish and French population gave him an appreciation of these people and prepared him for his work as an educator, which he had wanted to do for a long time. During his years in college, he had once said to one of his fellow students: “I have only one desire at heart, to find some place where I can devote myself to the education of children.”

Father Tabaret’s desire was realized in 1853. He was then appointed director of the college in Bytown (later to become Ottawa College, in 1861, and to receive a university charter in 1866). The institute had been founded in 1848 by Bishop Guigues to “provide ecclesiastical vocations and give to society and religion men who were capable of understanding and defending its interests”. It was still in its infancy. In spite of the small number of students and enormous financial difficulties, Father Tabaret did not allow himself to be discouraged. On the contrary, it seems the director thought only about the future and the obstacles he met only strengthened his determination. In 1861, he presented a report to the legislative assembly of United Canada in which he estimated the property and funds of the college at $70,000. The institute offered three study programs: the preparatory course, the classical course and the theology course. About 100 students were enrolled in the first two and fifteen in the third. The teaching staff was composed of twelve persons assisted by two masters of discipline.

The director had very clear ideas on education. He was convinced of the importance of being bilingual and insisted on the teaching of French and of English and if that presented difficulties, they were not insurmountable. Besides, in this part of the country conditions necessitated the study of the two languages so as to “diminish the unfortunate prejudices which divided these two peoples even though they had every reason to appreciate one another.” By so doing he earned the respect of the French Canadians and of the Irish, both Catholic and Protestant. Besides fulfilling the duties of director and professor in the college, Father Tabaret was also the trusted advisor of Bishop Guigues and he acted as Vicar general of Ottawa diocese during the absence of the bishop in 1862. From 1864 to 1867 he lived in Montreal as Provincial of the Oblates in the country. In this position he promoted the Indian missions and the recruitment of priests, especially English speaking priests. He also consolidated the already existing works of the Province.

Father Tabaret then returned to Ottawa where he became rector of the new university from 1867 to 1874 and from 1877 to 1886. He was also student director from 1874 to 1877. He played an important role in the development of the study program of the university, proceeding with its reorganization in 1874. The new program made ample provision for science and mathematics, encouraged commercial studies on a regular basis and encouraged sporting activities as a means of formation. Father Tabaret improved teaching methods and succeeded in increasing the number of specialized teachers. Even though he remained convinced of the importance of bilingual teaching, there were practical difficulties inherent in teaching in the two languages, which led to the adoption of English as the only language in teaching in almost all the courses of the new program. The university was to come back to the two-language usage in 1901. The studies plan provided, among other things, for a school of civil engineering and an industrial school. The school of civil engineering was initiated in 1874, much to the satisfaction of Father Tabaret, but he died before the industrial school, of which he had dreamed for the city of Ottawa, could be established.

In 1879, Pope Leo XIII conferred a doctorate in theology on Father Tabaret. He earned the esteem of his past pupils and of the Bishops Bruno Guigues and Joseph Thomas Duhamel and fully deserves to be considered as the builder of the University of Ottawa. He died in Ottawa on February 28, 1886.