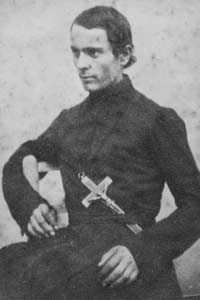 Charles Tatin was born in Romans in the diocese of Valence on August 30, 1837, son of Thérèse Michat and Pierre Tatin. He made his secondary studies at the minor seminary of Valence and was studying philosophy when he entered the novitiate of Notre-Dame de l’Osier on October 6, 1855. He made his oblation at Montolivet on November 2, 1856. He was admitted to vows in the October 24, 1856 session of the General Council. The secretary general wrote that day in his report: “The novice master says this brother is talented and has character. His vocation to me seems certain. I am pleased with his prayer life. A thoughtful and rather retiring person. He can give the impression of being cold, but his soul is not lacking in fire. My observations,” added Father Mouchette, moderator of scholastics, “bring me to confirm the favourable judgment contained in this report. I am very happy with this brother both as to his work and his prayer life. He has a deep love of his vocation and shows himself to be full of good will.”

In his reports on the scholastics from 1856 to 1860, Father Mouchette always judged Brother Tatin very favourably who he states: “is an excellent youngster, brimming with generosity and prayer life, always ready to take a personal share in the work.” In the Personnel Registry of 1862-1863 there is written after his name: “Short in stature, but very healthy. Very solid in virtue and prayer life. Serious in character, loves study and learning. Does not have a practical turn of mind, but loves intellectual research.”

Professor and Educator, Superior of the Scholasticate
Charles Tatin was ordained to the priesthood by Bishop de Mazenod on September 23, 1860 and was immediately sent as professor for the third form to the juniorate of Notre-Dame de Lumières which reopened in 1859. After one year, he received his obedience for the scholasticate as professor of dogma and moderator of scholastics. After his first year at Montolivet, on May 6 and July 5, 1862 he drew a rather sombre picture of the state of intellectual life there. He lays the responsibility for this state of affairs at the door of the professors who are “too busy” and who “do not like” their kind of life.

During the summer of 1862, because of a backlash on the part of Bishop Cruice and of the Marseilles clergy against the Oblates, Fathers Fabre and Tempier decided to take the scholastics out of the diocese and bought the boarding school of the Ladies of the Sacred Heart which had just closed down in Autun. Father Tatin was sent there with the scholastics in the autumn of 1862. He remained professor of dogma and was appointed spiritual director to the coadjutor brothers.

Provincial (1887-1890), Procurator to the Holy See (1890-1894), Assistant General (1894-1906)
From 1887 to 1890, Father Tatin was provincial of the Oblates of the English province. We know little of this period of his life. In 1890, when Father M. de l’Hermite, the assistant general died, Father Cassien Augier, procurator to the Holy See and superior of the Roman scholasticate was appointed assistant general and was replaced in his functions with regard to the Holy See by Father Tatin. In 1894, when Father Martinet died, Father Tatin was appointed second assistant general. He was elected to this post as well as to the post of secretary general at the General Chapter of 1898; then, at the Chapter of 1904, he was elected first assistant. He was not re-elected at the Chapter of 1906.

Father Tatin took part in seven General Chapters: 1879 as superior of the scholasticate at Autun and delegate of Bishop Jolivet, the vicar apostolic of Natal; 1887, as superior of the scholasticate of Belcamp Hall and delegate of the vicariate of Colombo; 1893, as procurator to the Holy See; 1898, 1904 and 1906, as assistant general; 1908, as delegate for Australia. In a report on the Chapter of 1898, they wrote (Missions O.M.I., p. 137) that his presence was useful because he was “well versed in the knowledge of both the English and the French languages and, because of that, a beloved and treasured link between the two factions of the family who pledged to him and will always maintain for him the most profound gratitude.”

After the General Chapter of 1908, Father Tatin remained in Rome until his death which took place on October 4, 1917. The war was on at the time, nothing was written about him. In his old age, he worked in the archives and drew up an Inventaire des archives de la maison générale à Rome, handwritten, 1911, 32 p.