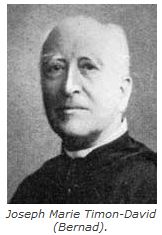 Joseph-Marie Timon-David was born in Marseilles on January 29, 1823. He made his secondary studies at the Jesuit college in Fribourg and his major seminary studies with the Sulpicians in Paris. Ordained to the priesthood on June 28, 1846, he dedicated his life to the sanctification of young workers. He worked for one year with the Youth Movement of La Loubière with Abbé Julien, then, the Youth Movement of Fr. Allemand who worked with the lower middle class. In 1849, he went on his own to found a movement aimed at the young workers.

Bishop de Mazenod gave him his unreserved support and on November 20, 1852, he canonically established this work and a trial community under the name of Congregation of the Sacred Heart of Jesus. Along with Abbé Fissiaux, he considered Abbé Timon-David as the best among the directors of movements. He wrote him about ten letters; he often received him at the bishop’s house and loved to visit his movement located on Oran street. He invited him to a diocesan synod in 1856. In 1857, he consecrated the movement’s chapel and, the very same year, named Abbé Timon-David a canon.

Joseph Timon-David wrote several works. In a few of them, he mentions Bishop de Mazenod whom he considered the founder of his society. Out of obedience to the bishop who was urging the parish priests and their assistant priests to live a common life, along with Abbé Brunello and Guiol, they made a vow to live together in order to sanctify the youth. Among his writings, Abbé Timon-David left one, which was not published, entitled: “The Sorrows of the Founder of a movement.” The third source of suffering for him came from the bishop’s house and the four bishops he had known since his ordination to the priesthood until this death on April 10, 1891. Among other things, he spoke of Bishop de Mazenod’s bad-temper and he states that he was “loathed by his clergy” but that he himself loved and appreciated him a great deal. He went to see him often, even during Bishop de Mazenod’s final illness. About this, he wrote in the Annales de l’Œuvre (vol. III, p. 82-83): A few days after he had received the last rites, “I came to his bedside and knelt beside him without saying a word. He opened his eyes; his hand beckoned me to him while he spoke the most tender words to me. Bishop Guibert wanted to make me leave because this tired him, but he forcefully retained me, always on my knees at his side with my head on his breast. “Bishop,” he told Bishop Guibert, “he built a chapel which is a cathedral and which I consecrated. He founded an admirable movement. I want you to go and see it.” On the evening of May 20, I was yet again with him, but he was motionless and perhaps unconscious. I left heart broken, tears pouring down my cheeks. Some business I had to do compelled me to sleep at La Viste and, the next day, when I got up, the wind of the Midi wafted to me the passing knell which was being sounded by the great bell of Notre-Dame de la Garde. It was a great sorrow for us. We were losing our friend, our protector, our father; the only superiority we felt on his part was that of his good deeds.”