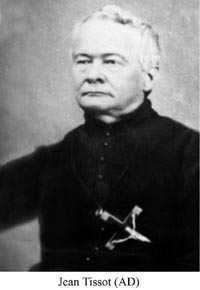 Jean Tissot was born in Côte d’Arbroz, diocese of Annecy, on September 30, 1824. His parents were François Tissot, farmer, and Pétronille Martin. After his studies in the colleges of Mélan and Annecy, he entered the novitiate in Notre-Dame de l’Osier on April 29, 1847 and made his vows on April 30, 1848. In the general council meeting of the previous March 28, he had been admitted to vows together with Claude Sallaz. The minutes of the meeting state that “they seem to have no more than ordinary talents but they more than make up for that by their qualities of heart and character and their solid virtue.”

Having taken vows he received his obedience for Canada. He left Marseilles in May 1848 and in July he spent a few weeks in Longueuil before moving on to Saint-Boniface where he arrived in September. There he studied theology under the direction of Father Pierre Aubert. On March 4, 1849, Bishop de Mazenod chastised the latter for having “ordained a young brother who did not know a word of theology” and he added “It is essential that you take great care of your missionaries, that you complete the formation of those who are sent to you while they are still young. Thus you must avoid being in too much of a hurry with regard to Brother Tissot; make him study.”

The scholastic was ordained to the priesthood on June 29, 1849 by Bishop Norbert Provencher. He continued his studies and worked in Île-à-la-Crosse from 1850 to 1855. Writing to Bishop de Mazenod in January 1853, he said that he was not content with his superior, Father Alexandre Taché and that he wished to return to France. The Founder replied in June asking that he put up with contradictions and assuring him that “the peace which the devil alone was capable of disturbing would come back once again.” On January 11, 1854, Father Tissot wrote again to the Founder thanking him for his “severe letter” and saying that he would remain at his post through obedience.

Father Tissot remained at Lac-la-Biche from 1855 to 1865 and was superior in Saint-Albert (1864-1868). For health reasons he was then recalled to Saint-Boniface where he became in successive periods, procurator for the diocese, vicar general from 1879-1885 and superior of the community in Bishop’s House. In 1873 he was elected as delegate of the Oblates of Manitoba to the General Chapter, which was to be held in Autun.

He died on August 4, 1885, the first Oblate to die in Saint-Boniface. His body was first of all laid in the crypt of the cathedral and now rests beneath a pillar of that historic building which remained standing after the fire of 1968.