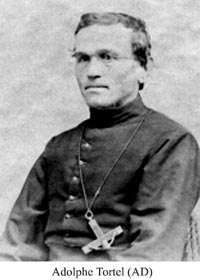 Adolphe Tortel was born in Saint-Laurent-en-Royans, diocese of Valence, on October 29, 1825. His parents were François Tortel, cabaret owner, and Marie Gachet. He studied in the minor seminary of Valence and in an institute in Bourg-de-Péage. He then got to know the Oblates and entered the novitiate in Notre-Dame de l’Osier on January 11, 1845. He was admitted to vows in a meeting of the general council of December 16, 1845. In the minutes of that meeting the secretary wrote: “admission of Adolphe Tortel: a young man who has come to us from the junior seminary of Valence; has made astonishing progress as regards piety and the religious virtues… he has not been forgetful of his duties for even one moment and may now be counted among the most fervent of the novices. Neither is he lacking in talent and promises to be a good candidate from this point of view as well.”

He then received his obedience for Canada. He was professor of moral theology and moderator of scholastics and seminarians n Ottawa College from 1859 to 1868. Afterwards he worked in the parishes of Holy Angels in Buffalo, New York (1868-1870) and Immaculate Conception in Lowell, Massachusetts (1870-1873). In Lowell he took part in about twelve parish missions. He then returned to Canada as superior of Saint-Pierre-Apôtre in Montreal (1873-1879) and then superior and pastor in Saint-Sauveur, Quebec (1879-1883). At the end of his term in Montreal he was elected delegate to the general chapter and came back to France after twenty years of absence.

In 1883 he received his obedience for the new province of the United States and was appointed admonitor to the provincial as well as being pastor in Immaculate Conception in Lowell (1883-1890). He died there after a short illness on February 22, 1901 and is buried in the Oblate cemetery in Tewksbury, Massachusetts.

In a necrology note which has remained in manu form, Father Mangin wrote: “As Father Tortel was throughout his life, so he wished to remain until his death: a man of discipline, a man of the rule, having nothing at heart except the progress of his religious family. He was esteemed by his superiors, loved by his brothers whom he cherished with all his heart he passed in our midst doing only good. He always held his arms at the ready, he never ceased to fight the good fight until age and illness forced him to lay down his guns.”