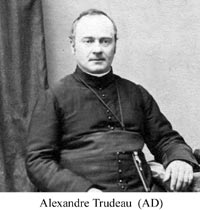 Alexandre Trudeau was born in Montreal, on February 16, 1823. His parents were Alexis Trudeau and Siloë-Mathilde Smith who was of English Protestant origin and had been converted to Catholicism on the occasion of her marriage. Alexandre was the first of eight children born to this highly respectable family. He began his secondary studies in Montreal College and continued in the minor seminary of Saint-Hyacinthe. Alexandre was a class companion of Alexandre Taché, later to become archbishop of Saint-Boniface. The young Trudeau was gifted with a pleasant character and many talents, musical as well as others. He spoke both French and English well. He entered the major seminary in Montreal and taught English in the minor seminary of Saint-Hyacinthe from 1843 to 1845 while continuing his study of theology.

In 1845 he became ill and doctors prescribed complete rest. In 1846 he accompanied Bishop Bourget to Europe. The travellers stopped in Marseilles, guests of Bishop de Mazenod and of the Oblates. It was then that he asked to be admitted to the Oblates and he began his novitiate in Notre-Dame de l’Osier on December 7, 1846, took vows on December 8, 1847 and was ordained to the priesthood by Bishop de Mazenod on December 18, 1847. He spent the winter of 1847-1848 in the church of Le Calvaire in Marseilles to nurse his larynx and, after a short visit to Rome, in May 1848, he went to England to perfect his English. Bishop de Mazenod wrote to Bishop Guigues on September 26, 1848, saying that: “I am very satisfied with him in every way. He behaved perfectly during his novitiate and he has not put a foot wrong since his profession. He is a charming candidate. Unfortunately his health is not very strong. I shall send him to you without fail in the coming springtime.”

In 1860, the bishops of Canada put forward the name of Father Trudeau to the Congregation of Propaganda Fide as a successor to Bishop Modeste Demers in Vancouver. Writing to Bishop Guigues on November 22, 1860, Bishop de Mazenod said that he would not be opposed to this appointment but that he would not give any Oblates to the diocese. “I have no reason to believe that he is greatly attached to the Congregation. At least he has forgotten that this Congregation has a superior who is father of all the members who belong to it. That good little heart has never given me a sign of life. Not a single event in my life has ever given him cause to remember me, even though I have given him enough indications of my affection for him to feel some gratitude towards me. If this Father has no more attachment to the Congregation than he has regard for me, I would greatly hesitate before sending members of our Congregation to work with him, since he is not likely to pride himself on belonging to it even when he becomes a bishop…” On March 29, 1860, Bishop de Mazenod wrote to Cardinal Barnabò, asking him not to appoint Father Trudeau to Vancouver and he gave as a reason: “If I asked your Eminence to be so kind as not to appoint the designated subject, Father Trudeau, to that See, I did so to fulfil a duty of conscience imposed upon me by the confidential and most personal communications that Father felt it necessary to send me as his superior. In the eyes of your Eminence, my observations must have that special character with which they are endowed by my profound knowledge of the subject. I am in no way surprised that his Excellency, the Bishop of Montreal, judging on the basis of external qualities alone, is of a contrary opinion and insists upon the adoption of his choice. My opinion however, should not be compared with that of this worthy prelate. We begin from different principles and while one only considers the exterior, the other considers the interior dispositions. These dispositions oblige one to insist anew that Father Trudeau, in whom I am pleased to note excellent qualities, should not be raised to the episcopacy…”