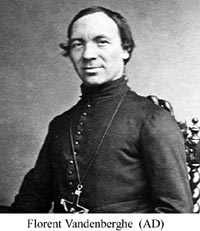 Florent Vandenberghe was born in Popéringue, diocese of Bruges, Belgium, on August 3, 1826. His parents were Benoît Vandenberghe and Amélie Bovery. Having completed his classical studies in the college of Ostende and two years in the major seminary of Bruges, he began his novitiate in Notre-Dame de l’Osier on October 31, 1847 and took vows there on November 1, 1848. He then did two years in the major seminary of Marseilles and was ordained to the priesthood by Bishop de Mazenod on May 25, 1850. In the reports made by the novice master, Father Ambroise Vincens there is only one mention of Florent Vandenberghe: “Perfect from every point of view”. Father Jean Joseph Lagier, moderator of scholastics too, makes only one mention of this scholastic: “Brother Vandenberghe seems to be excellent… submissive as a child, regular to perfection and applies himself well. As infirmarian he has shown the charity of a mother. Shy and reserved, he seems afraid to show who he is and what he thinks. He works hard, thinks a lot and does not talk of what he is doing. I have known him for three years and been his director for one.”

In the period 1850-1852 he remained in the church of Le Calvaire and Notre-Dame de la Garde in Marseilles. Because of a “defect in his voice organs and the accent resulting from the Flemish language,” he was considered to be unsuited to preaching. In 1852 he became socius to the novice master, Father Gustave Richard, in Notre-Dame de l’Osier and he replaced the latter in 1853. He remained novice master until 1861, being also superior of the house from 1854 to 1861 and first extraordinary councillor of the Northern province from 1855 onwards. When sending him to Osier, Bishop de Mazenod wrote to Father Richard on May 29, 1852: “I am very fond of the Belgians. Be sure to tell that to Father Vandenberghe… Besides, you know that I want to see the Congregation established in that country which is so rich in vocations.” On appointing him superior, he wrote him a letter on August 24, 1854, in which he said: “Take courage, my dear Father Vandenberghe. Your novitiate is working well and for that we give thanks to God and let it be for you a source consolation and encouragement. For the rest, be a superior without haughtiness, but with dignity, and let everyone keep to his place, with the Rule book to hand. I would always be inclined to support authority towards and against all else…”

Assistant General, Provincial in Canada and superior of the missions in Texas (1861-1882)
After the death of Bishop de Mazenod on May 21, 1861, Father Tempier, vicar general, appointed Father Vandenberghe Provincial of the Midi (southern) Province. He held that position for only a few months because the general chapter elected him fourth assistant and secretary general in December 1861. It was in this capacity that he did the canonical visitation of the Oblates in Eastern Canada and the United States in 1863-1864 and in Western Canada in 1864-1865. On returning to France he worked on revising the Acta of the General Chapters.

After the General Chapter of 1867, Father Fabre appointed him Provincial of Canada. He founded many houses, particularly the novitiate of Notre-Dame in Lachine, a residence in Lowell and another Temiscamingue. After the general chapter of 1874 he was sent as superior of the missions in Texas and shortly afterwards he was appointed vicar general in Galveston.

Father Vandenberghe became well known in the Congregation especially in the role of educator, and also as a director of souls and administrator. He took part in the general chapters of 1856, 1861, 1867, 1873 and 1879. In his necrology note Father Joseph Fabre wrote: “It can be said of him that he loved God in truth and in works; in whatever he did, in his conversations and in all his behaviour, it was obvious that he lived for Jesus and by Jesus. It was with God and in prayer that he first dealt with either business affairs or with measures to be taken concerning the members of his community. When his prayer was more prolonged and more intense at the foot of the altar, the immediate reaction was ‘once again there must be some serious suffering or some grave problems touching the heart of Father’. Everybody among us still remembers because everyone has learned the beautiful lesson from a Provincial who, in spite of the multiplicity of his worries and the gravity of the business matters he had to deal with, found it as natural to be in the chapel as in his room.”

Father Vandenberghe died of the yellow fever in Brownsville, after six days of illness, on August 28, 1882.