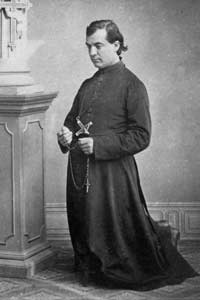 Augustin Vassal was born at Raucoules in the diocese of Puy on April 13, 1831. After his classical studies at Monistrol-sur-Loire, he entered the novitiate of Notre-Dame de l’Osier on October 8, 1851 and made his oblation at Marseilles on December 8, 1852. His taking of vows was delayed because of his health.

He studied theology at the major seminary of Marseilles. In the report on the Oblates, Father Mouchette, moderator of scholastics, wrote in 1853: “Vassal, always struggling with health problems, very thin; totally resigned to God’s will; works very well, does all his prayer exercises with pleasure. In spite of his illness and his suffering, he is joyful in recreation.” Same observations in the 1854 and 1855 reports. In 1856, the moderator wrote once again: “always good and very regular in his observance in spite of his sufferings. Excellent for everything, etc.” As much as possible, the Founder used to occasionally meet with each individual scholastic. We have the notes that he took after having met with a few of them. Concerning Augustin Vassal, he wrote: “A general disposition to do anything obedience might prescribe; enough of a leaning, however, for teaching. In spite of his ongoing suffering, very happy, gets involved in everything, working, studying as if there was nothing amiss.”

Brother Vassal was ordained to the priesthood by Bishop de Mazenod on June 8, 1856 and he received his obedience for the major seminary of Fréjus, then for the major seminary of Ajaccio in 1863-1864. He was then sent to Aix as mission preacher, but he only stayed there two years. He was not suited for mission preaching. In this regard, the writer of his obituary wrote: “His clear, musical, even warm, voice enthralled his listeners. It was not disturbing. When one listened to him, one sensed that he was thoroughly imbued with the truths that he proclaimed and that his heart spoke through his mouth; but this suave eloquence was blended with a liveliness of feeling and an imperturbable gentleness. It was the kind of shower of light of which the prophet speaks, a shower of light that refreshes and reinvigorates the heart without disturbing its peace. It had the power of bringing forth fruit in convents where souls have to be moved without upsetting them. But it would have brought forth little fruit in the missions where, just like on the battlefield, it is not unctuous words, sweet sounds, but rather the blasts of the trumpet that set hearts racing. The missionary sweeps through like the storm and the heavenly rain of grace falls and freshens the thirsting earth only after thunder has shaken the mountains and the lightning has split the clouds asunder.”

Father Vassal, then, spent 1868-1869 at Notre-Dame de l’Osier as chaplain of the sisters, then lived at Le Calvaire in Marseilles from 1869 to 1885. There he heard confessions in the chapel and in a few convents, then he was superior from 1877 to 1880. In 1885, at the insistence of Father Santoni, he accepted to go to Ajaccio as chaplain to the boarding school of the Sisters of Saint Joseph, a rather imposing task with 70 religious women and 1100 students. In addition to that, many ladies from the city came to confession at the chapel of the institute. Father Vassal worked very hard without a day’s rest or vacation. After a short, but drastic illness, he died on April 3, 1895.

Father Bartholomew Albertini, the author of his obituary, wrote that Father Vassal, during his lifetime, had especially worked as a confessor. Those who knew him, he specified, say that “he was a man of God, a religious of regular observance, a mortified man. To be sure, he was not the kind of person who would have excused himself from doing penance while preaching it to others. They consider that he was a martyr for confessing men before God just like he was one who witnessed to God before men. This worthy priest richly merited the purple robe of the glorious confessors….” Father Albertini also praised the fraternal charity and the prayer life of Father Vassal: “A man with a happy disposition, he laughed easily and wholeheartedly. He used to give us this advice: as a remedy for all illnesses, gentle exercise, moderate meals and candid joy. His prayer life was steadfast. It did not, like the stock market, fluctuate up and down. He nurtured it with meditation and the reading of the Gospel and the Imitation.