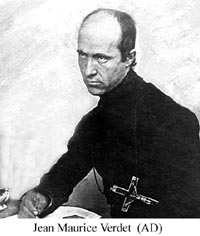 Jean Maurice Casimir Verdet was born in Malaucène, diocese of Avignon, on September 22, 1825. He studied theology in the major seminary of Avignon. At the beginning of his seminary studies he wished to go to the foreign missions and, for that reason, he wished to join the Society of the Sacred Heart of Mary but his bishop was opposed to the idea. He then met Father Leonard Baveux, OMI and wanted to become an Oblate. Thanks to the intervention of Bishop de Mazenod he obtained the permission of his bishop and he entered the novitiate in Notre-Dame de l’Osier on September 1, 1847. In March 1848, Father Jacques Santoni informed Bishop de Mazenod that the scholastic Verdet “is a young man of solid virtue; he is pious, zealous, very rational and of such gravity that he could be taken for a man of 50 years.” His believes, however, that his zeal is “somewhat exaggerated” and, because of a weakness in his larynx, he wishes him to continue his novitiate in Marseilles. That is where he made his profession on September 3, 1848 and he was ordained to the priesthood on September 23.

He was professor in the major seminary in Ajaccio in the period 1848-1849. Father Jean Joseph Magnan, the superior, wrote to Bishop de Mazenod on November 7, saying that “Father Verdet justifies all the good things that your Excellency has told me about him. He is as regular as Father Pont but without the same stubborn attitude… He has begun his classes on Holy Scripture and besides, for the time being while awaiting approval or disapproval on your part, he is acting treasurer.” In December, Father Magnan added: “The best I have here from the point of view of ecclesiastical and religious virtues, is Father Verdet: good judgement, no exaggeration, calm temperament, fortunately taking more seriously than his confreres the Rule to which he has vowed obedience, and not being a burden to anyone.” Father Magnan regrets, however, that Father Verdet’s health is not so good; he has had to send him to Vico for a month to rest. Father Verdet was in Notre-Dame de Bon Secours in 1850-1851. At the beginning of 1852, Bishop de Mazenod decided to send six priests and a Brother to Texas and he appointed Father Verdet as superior of the mission. In September he wrote reproaching him for having assigned all his confreres to the college in Galveston. “How is it that you are assembled in Galveston, while half of you were destined for the missions… It must be made quite clear that our Congregation is not a teaching Congregation, like the Jesuits. We have been instituted to give missions, etc.”

At the beginning of 1853, Father Jean-Marie Baudrand was appointed superior of the college in Galveston and Father Verdet was superior and novice master in Brownsville where he began to build a church in brick. In the General Council meeting of August 17, 1856, because of his poor health, it was suggested that he be appointed superior in Plattsburgh or in Burlington and the he be replaced by Father Augustin Gaudet. By that time, however, Father Verdet was already dead. He had died on August 10. He had set out from Brownsville to New Orleans with the intention of withdrawing the monies sent by the Society for the Propagation of the Faith to purchase the timber necessary for the building of the church and had succeeded in finding a free passage on the ship called the Nautilus which called at Galveston. There he had time to visit the priests in the college but he was quite ill. Continuing the voyage towards New Orleans the ship was caught in a violent storm in the Gulf of Mexico and sank with the loss of all on board.

Father Étienne Vignolle informed Bishop de Mazenod of the tragedy in a letter dated August 26 and he added: “We have suffered an immense loss with the death of Father Verdet. The reports we have had either by letter of by word of mouth have made me appreciate the treasure the Congregation possessed in him…” Some days later Father Rigomer Olivier added: “Oh, what a terrible blow! … It would be impossible for me, my dear father, to describe the sadness this news has brought in our midst, not only in the hearts of our Catholics but also in those of the Protestants and the most impious whom we have here. All have paid authentic homage to the virtues and merits of Father Verdet. The following day we celebrated a solemn service for the repose of his soul at which the Fathers from Matamoros were present as was also an extraordinary concourse of people…”

Bishop de Mazenod mentioned this death in a number of letters to Oblates. Among others, he wrote to Bishop Guigues on November 27, 1856: “What a terrible tragedy this has been which has taken from us such an excellent member as Father Verdet! Such losses as this are irremediable. We must acknowledge that the good God puts our trust to a cruel test when we look at the list of our dead and on the other hand we see so many miserable apostates. He takes from us these excellent members while the miserable ones remain in excellent health. This is not an observation that I allow myself to make in order to complain in the face of divine Providence who rewards his elect as he wills. It is merely a cry of sorrow wrenched from me at the loss of our members and the expression of my dismay at being unable to respond to all the burdens the Lord places on our shoulders.”

G. A.: oblation formula and 5 letters written by him; three letters concerning his death.
Doyon, Bernard, o.m.i., The Cavalry of Christ on the Rio Grande, Milwaukee, 1956, passim.