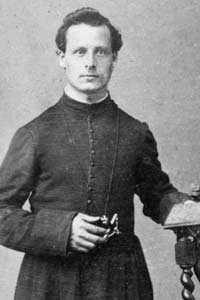 Jacques Pierre Visidari was born at Chiatra in the diocese of Ajaccio on August 29, 1832. After his first year of theology at the major seminary of Ajaccio, he began his novitiate at Notre-Dame de l’Osier on December 24, 1853 and made his oblation at Marseilles on December 25, 1854. He continued his studies of theology at Montolivet from 1854 right up until his ordination on June 28, 1857. In his reports, Father Mouchette, moderator of scholastics, describes him as “a very good religious, filled with good will, diligent in his duties,” very charitable in his duties as infirmarian, but naturally slow moving.

In 1857, he received his obedience for the church school at Vico where he was treasurer, professor and prefect of studies. He had to give up teaching in 1858 because of illness; moreover, he had been spitting blood when he left Marseilles in 1857. In 1861-1862, he was sent as treasurer and professor of Sacred Scripture to Fréjus. He then asked Father Fabre to leave the Congregation to join the Carthusians. He was asked to think it over for one more year (1862-1863) which he spent at the scholasticate of Autun as professor of Sacred Scripture and history. In April 1863, he asked once again to be dispensed from his vows. He was not getting along with Fathers Martinet and Tatin and was showing himself to be very independent. During the summer, Father Fabre promised to dispense him from his vows, but sent him first as professor to the juniorate of Lumières. In the month of October, Father Visidari disappeared from Lumières without notifying his superiors. On November 18, he wrote from his home in Chiatra and insisted on obtaining a dispensation from his vows. He no longer mentioned becoming a Carthusian and said that he was remaining with his family for health reasons. He admitted that he had never intended to commit himself by the vow of perseverance and added that the Congregation had contributed nothing to him spiritually. Father Fabre called together his council on November 23, 1863 and expelled him from the Congregation.