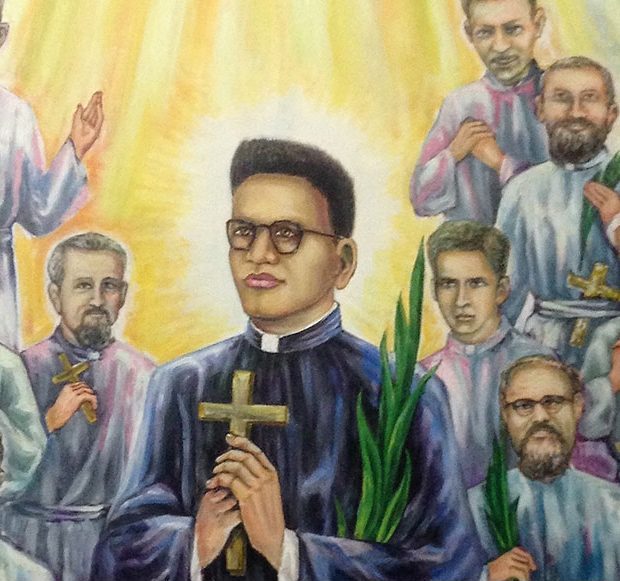 Fr. Joseph Thao Tìen (1918-1954), Laotian and Priest of the diocese of Houaphanh province, ordained in 1949 might be considered as the first Laotian martyr. It was during Easter time in 1953, while guerrillas stormed Sam Neua, Laos, that many missionaries retreated to safety. Joseph Thao Tìen decided otherwise: “I am staying for my people. I am ready to lay down my life for my Laotian brothers and sisters.” He was marched to the prison camp in Talang; people knelt along the way, weeping. He told them: “Do not be sad, I will come back. I am going to study… Make sure that your village keeps improving.” One year later, on June 2, 1954, in Muang Xoi (Sam Neua). Joseph Thao Tìen was condemned and shot to death.

Fr. John Baptist Malo, M.E.P. (1899-1954), born in France and a member of the missionary institute “Missions Etrangères de Paris”, had been a missionary in China before coming to Laos. In 1954 Fr. Malo was detained with four companions. Soon after, on his way to the prison camp, he died from exhaustion and ill-treatment at Ha Tinh in a remote valley of Central Vietnam.

Fr. René Dubroux, M.E.P. (1914-1959) born in Lorraine/France and a member of the missionary institute “Missions Etrangères de Paris”. In 1959 he was betrayed by a close associate and eliminated as a mere hindrance in the guerrillas’ path. He died in Palay (Champasak).

In Southern Laos, Fr. Noël Tenaud, M.E.P. (1904-1961) from Vendeé in France and a member of the missionary institute “Missions Etrangères de Paris” and his faithful catechist, Joseph Outhay (1933-1961) from Thailand, were taken and killed in Savannakhet in 1961

Fr. Marcel Denis, M.E.P. (1919-1961) born in France and a member of the missionary institute “Missions Etrangères de Paris”, was kept prisoner for a while but ended in the same way as his confreres. He was killed at Khammouane in 1961. One of their confreres wrote: “All of them were praiseworthy missionaries, ready for any kind of sacrifice. They lived in utter poverty and their dedication knew no limit. In those troubled times all of us, to some degree, aspired to martyrdom, wishing to surrender our lives totally to Christ. We did not fear risking our lives. All of us endeavored to reach the poorest of the poor, to visit their villages, to take care of the sick, and especially to announce the Good News of Jesus…”

Fr. Lucien Galan, M.E.P. (1921-1968) from France and a member of the missionary institute “Missions Etrangères de Paris”, started his missionary life in China and visited some isolated catechumens on the Boloven plateau. Because of the looming danger, his Laotian pupil Thomas Khampheuane (1952-1968), aged 16, had decided to go along. On their way back, enemies lay in wait,  Both were killed at Paksong (Champasak) in 1968.

Luke Sy (1938-1970), a young Laotian catechist and father of three, was sent by his bishop to evangelize the Vang Vieng areas in January of 1970. In March, he was visiting catechumens in a distant village with a companion, Maisam Pho Inpeng (1934-1970) from Laos, also the head of a family. Catechizing and tending to the many sick villagers took quite some time. They were executed on the return trip. A volley of bullets put an end to their missionary thrust in Den Din (Vientiane Province).

These seventeen men, lay Christians and priests together, Laotians as well as foreigners, gave the supreme testimony for sake of the Gospel. The young Church of Laos recognizes them as her founding fathers.