Short Story of the Martyrdom

The Spanish Civil War was fought from 1936 to 1939 between the Republicans, who were loyal to the established Spanish Republic, and the Nationalists. The Nationalists prevailed, and ruled Spain until 1975. One aspect of the Spanish Civil War was religious persecution. Many people were killed by Republicans (socialists, communists and radical lay labor unions) during the war because of their faith. A report of the religious persecution in Spain quotes the murder of 6,932 members of the clergy and religious sacrificed in this persecution: 12 bishops, 4,172 secular clergy, 2,365 religious men and 283 religious women. Within this general climate of hatred and antireligious fanaticism, one may justly place the martyrdom of 22 Missionary Oblates of Mary Immaculate. 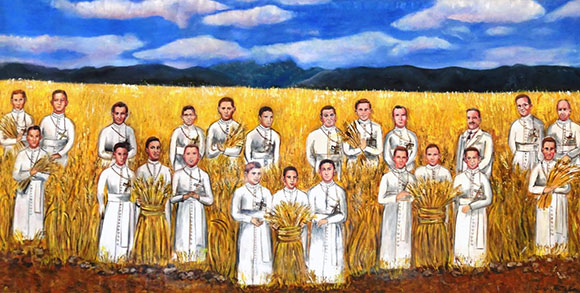 The Oblates had established themselves in the Estación neighborhood of Pozuelo de Alarcón in 1929. The provincial superior lived in the Pozuelo. The Scholasticate there was the center of formation. Some priests served as chaplains for three communities of sisters. They also provided pastoral service in the surrounding parishes: confessions and preaching. Oblate scholastics taught catechism in the neighboring parishes. This religious activity began to worry the revolutionary committees in the Estación neighborhood. The Oblates simply adopted an attitude of prudence, composure and calm, committing themselves not to respond to any provocation.

On July 20, 1936, socialist and communist youth took to the streets and began to burn churches and convents, especially in Madrid. The militia of Pozuelo, on the other hand, attacked a chapel in the Estación neighborhood. They threw vestments and images into the street and set them afire. Then they burned the chapel and went on to repeat the same scene at the local parish. On July 22, a large contingent of militia, armed with shotguns and revolvers, attacked the Oblate house. The first thing they did was to round up the 38 Oblates, who were made prisoners in their own house, brought together in the refectory where the windows were barred. On the July 24, at about three in the morning, there were the first executions. They called out seven Oblates.

Without any explanation, they were loaded into two cars and taken to their place of martyrdom, where they were shot.

On that same July 24, 1936, the police were given orders to bring the rest of the religious to the General Security Office. On the next day, after filling out some forms, the 15 other Oblates were unexpectedly let go. They sought refuge in private homes. But in October they were hunted down again, captured, and imprisoned, where they suffered hunger, cold, fear and threats. There are testimonies from some survivors as to how they accepted with heroic patience this difficult situation which implied the possibility of martyrdom. Among them, there reigned a spirit of charity and an atmosphere of silent prayer. On November 7, 1936 two of them were executed:

There would be no formal accusations, no judgment, no defense, no explanations. They were driven to Paracuellos de Jarama and executed there.

It has not been possible to obtain direct information from eyewitnesses about the moment of execution. The gravedigger has declared that one of the Oblates, the Provincial Fr. Francisco Esteban Lacal, must have said: “We know that you are killing us because we are Catholics and religious. That we are. My companions and I forgive you from the bottom of our hearts. Long live Christ the King!”

It was evident in the process of beatification that all of them died professing the faith and forgiving their tormentors, and that, in spite of the psychological torture during their cruel captivity, none of them denied nor lost the faith, nor did they lament the fact that they had embraced a religious vocation.