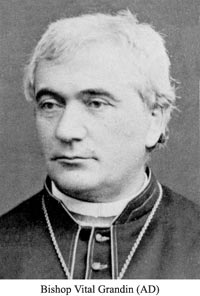 Bishop Vital Justin Grandin was born on February 8, 1829, at Saint-Pierre-sur-Orthe, in Mayenne, France. He was born of very poor parents. At the age of seven, Vital felt the desire to become a priest. With the help of many benefactors his dream was indeed to become a reality. In 1846, he entered the Précigné Seminary, and, in 1850, continued on to the Grand Seminary of Le Mans. Being anxious to work in the Foreign Missions, he entered the congregation of the Oblates of Mary Immaculate on December 28, 1851. He was then ordained a priest in Marseille on April 23, 1854, by Bishop Eugene de Mazenod, the founder of the Oblates.

Shortly after, he left for the distant missions of Western Canada. During the ensuing years, he devoted himself entirely to the conversion of the First Nation peoples and to the aid of the prairie settlers. Fr. Grandin served in the missions at Red River, from which he went to Île-à-la-Crosse, Saskatchewan, and then, in 1855, to Fort Chipewyan, where he remained until 1857. He also visited the missions of Fond-du-Lac, Saskatchewan, and Fort Resolution in 1857. Returning to Île-à-la-Crosse, he was named Bishop of Satala and Coadjutor of Archbishop Alexandre Taché, O.M.I. (1823-1894), Bishop of Saint-Boniface, Manitoba, on December 21, 1857.  But, he did not receive the news until February of 1859. He was only 29 years old. He returned to France and was consecrated at Marseille on November 30, 1859, by Saint Eugene de Mazenod. 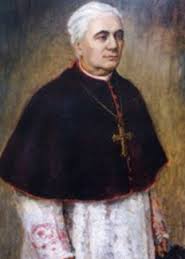 In 1869, he established himself at Saint-Albert and worked among the Cree and the Blackfoot. On September 22, 1871, he was named the first Bishop of Saint Albert (Alberta). His apostolic field at the time consisted of a few scattered, poverty stricken, missions. He frequently visited his immense diocese and his actions during the Insurrection of 1885 in defense of the Catholic schools were energetic and effective.

He died at Saint Albert on June 3, 1902. He was buried in the crypt of the parish church of Saint-Albert. Many lakes, villages and districts in the Canadian West and the Province of Quebec have been named for him.