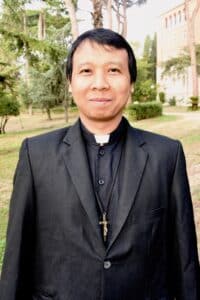 He professed his First Vows as a Missionary Oblate of Mary Immaculate on 11 August 1996, and was ordained a  priest on 7 December 2003.

He served as Parochial Vicar in two parish from 2003-2006.  He then studied Spiritual Direction in Australia from 2006-2007.  In 2008, he joined the Formation Team in the Scholasticate in Jogjakarta, Indonesia.  From 2009-2013 he served as Superior of the Scholasticate in Jogjajkarta, Indonesia.  In 2013 he was assigned to the community in Aix-en-Provence, Francia and in 2019 he was named Superior of the same community.

On Saturday, 1 October 2022, the 37th General Chapter of the Missionary Oblates of Mary Immaculate elected Fr. Henricus Asodo, O.M.I. as the second Assistant General for a term of six years.

He speaks English and French.