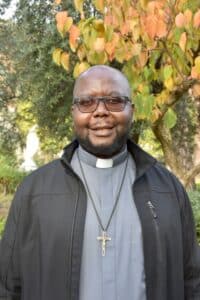 He professed his First Religious Vows as a Missionary Oblate of Mary Immaculate on 2 February 1998, and was ordained a priest on 8 May 2004.

He served as Pre-Novitiate Formator in Luska, Zambia from 2004 to 2005. In 2006 he was assigned as Formator at the Scholasticate in Cedara, South Africa, and at the same time served as a professor at St. Joseph’s Theological Institute. In 2016 he did advanced studies at Oblate School of Theology in San Antonio, Texas, USA, and at the same time served as Formator at the San Antonio Scholasticate. In 2021, he was appointed Superior of the Delegation of Zambia.

On Saturday, 01 October 2022, the 37th General Chapter of the Missionary Oblates of Mary Immaculate elected Fr. Raymond Mwangala, O.M.I. as First Assistant General for a term of six years.

He speaks English and Italian.