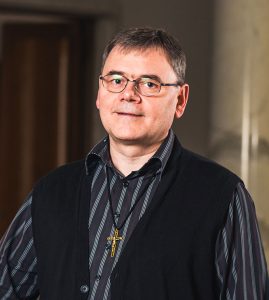 Fr. Marek was born in 1965 in Sandomierz, Poland and entered the Novitiate at Swiety Krzyzin 1985, where he was professed the following year. After philosophical studies in Obra, he was to continue his first formation in Rome where he was perpetually professed in 1990 and, in the following year ordained to the diaconate, which order he exercised during a two-year regency in the Cameroon. Assigned to the Polish Province and ordained to the priesthood in 1993 in Obra, Fr. Marek completed a license in philosophy in Rome in 1996 and continued philosophical studies in Warsaw, where he also taught from 1998 to 2004. In the following years he was involved in missionary animation and since 2010 has worked in mission preaching in Poland. In addition to his native Polish, he is fluent in English, French and Italian.