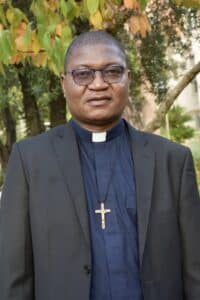 Fr. Erastus Kapena Mbili Shimbome, O.M.I., was born on 08 September 1971 in Omusati, Namibia.  He professed his First Vows as a Missionary Oblate of Mary Immaculate on 5 February 1994, and was ordained a priest on 4 December 1999. Following Priestly Ordination, he served as Vicar at Christ the King Parish in Okatana, Namibia (1999-2002). From 2002-2018, he was Pastor of four different parishes. Since 2019, Fr. Shimbome has served as Provincial of Namibia Province.

On Tuesday, 4 October 2022, the 37th General Chapter of the Missionary Oblates of Mary Immaculate elected Fr. Erastus Kapena Mbili Shimbome, O.M.I. as the General Councilor for the Africa-Madagascar Region for a term of six years.