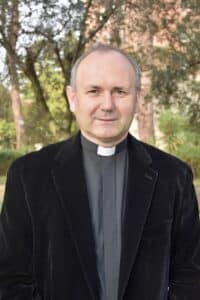 Fr. Antoni Bochm, O.M.I., was born on 29 March 1969 in Miedźna, Poland. He professed his first Religious Vows as a Missionary Oblate of Mary Immaculate on 08 September 1993, and received priestly ordination on 19 June 1999.

He served as assistant parish priest for two years before pursuing higher studies to prepare himself for formation ministry at the Oblate Scholasticate in Obra. There, he served as spiritual director and professor, as well as Superior until he became Provincial of the Province of Poland in 2014. During the 36th General Chapter held in 2016, he was elected the General Councilor for Europe. On Thursday, 01 October 2022, the 37th General Chapter of the Missionary Oblates of Mary Immaculate elected him as the Vicar General for a term of six years.