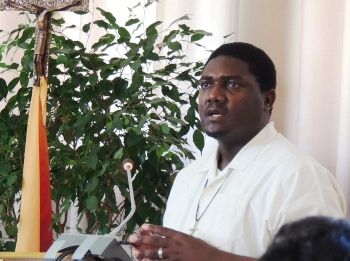 The Director of the Oblate General Service of Justice, Peace and the Integrity of Creation, Fr. Kennedy KATONGO, died on September 14, 2016, at the General House in Rome. He passed away in the early hours of the morning, before sunrise. Fr. Kennedy was only 36 years of age when he suffered a severe heart attack.

He was born in Lusaka, Zambia, on May 3, 1980, and joined the Oblates in 2002. After his novitiate, he made first vows in Johannesburg, South Africa, on February 1, 2003. He made his final profession in Lusaka on December 28, 2008. He studied philosophy St. Joseph Theological Institute in Cedara, South Africa, and theology at Oblate School of Theology in San Antonio, Texas, USA.

He was ordained a priest in Lusaka on October 9, 2010. He served in parish ministry in the Kalabo Mission and at St. Mary´s Parish in Lukulu, Zambia. In 2014, he was named Director of the Oblate JPIC Service in Rome.

His death occurred on the very day that the 36th General Chapter began in Rome.

May the Lord he served for all too few years on earth welcome him into eternal life.