Quote of the day

Act always under the impulse of the Holy Spirit.

Reflection of the day

February 1 – My friend Jesus, love of my childhood, strength of my youth

“On a little altar, in the silence of the chapel, or in murmuring prayers to God, alongside the lamp and two candles, how many times have I renewed the tremendous mystery of the Crucifixion and Death of my friend Jesus, love of my childhood, strength of my youth.”

Frédéric Ozanam and the Oblates of Mary Immaculate 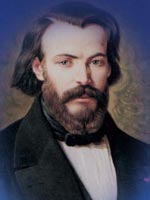 On August 22, 1997, Pope John-Paul II declared as “Blessed” Frédéric Ozanam, founder of the Saint Vincent de Paul Society. Much was said on this occasion. He was recalled as a great layman, deeply Christian, husband and family man, university professor, social reformer and friend of the poor. Emphasis was placed on the beginnings of his “conferences of charity”, when on April 23, 1833, at the young age of twenty, he brought together six university companions in Paris, and involved them in a movement which in a few years spread throughout France, as well as in Rome, London, Munich, Brussels and Algiers. He said at one time: “My desire is to enfold the world in a network of charity.” And in those days, when capitalism was exerting its ravages among the poor populace of the land, Ozanam and his companions were quietly making weekly visits to needy families. They followed the guidance of Sister Rosalie Rendu, a Daughter of Charity and true Mother Teresa of the 19th Century. Gifts of food, firewood, clothing, etc. were distributed. Sister Rosalie advised these young gentlemen: “Above all, learn to respect my poor, to love them, and especially, not to judge them.” END_OF_DOCUMENT_TOKEN_TO_BE_REPLACED

Latest from: Eugene de Mazenod speaks to us

Father Ricard had suffered from poor health in France, and those who knew him were surprised at the choice of this man for a physically challenging mission. Eugene, however, could not think of a better person to send to found … Continue reading →

(Chaclacayo, Lima) The Oblates of the OMI delegation of Peru. Deacon John Kuks Sampa, OMI from Zambia recently joined them to have a missionary experience. Peru is the only delegation of the Congregation that functions directly under the purview of the General Administration.