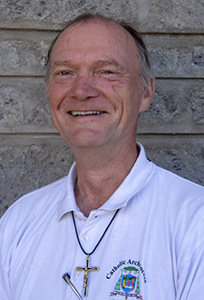 One of the challenges of being a priest here, and worse, a white priest, is that everyone thinks you have money!  So, trying to sift out genuine calls for help and those that are just after a freebie is not always easy.  The second challenge is trying not to make people dependent on myself or the Oblates.  It is good to try and work through proxies.  That is something St. Eugene de Mazenod used to do 200 years ago with the Fish Monger wives on the tough wharves of Marseilles, France.  Firstly, they would advise Bishop Eugene who was genuine, and then they would act as go-betweens so the assisted person often thought it was the Fish Mongers helping them.

Today as I read the daily homily reflection from USA Bishop Robert Barron (29 March 2020), the following text encouraged me to see Jesus working through our actions to help the youth.  “The voice of Jesus can call us… in various ways, by our actions and words to: “Untie him and let him go.”

As a bit of background, one of our Oblate parishes in the countryside established a sub-youth group in the capital city of Nairobi as a way to keep the youth from home united and able to support each other.  As the Oblates now have a few parishes, we can now call it Oblate Youth, Nairobi (OYN).  As youth from our parishes come to Nairobi for work or study, we encourage them to connect to OYN.  Sometimes they do not bother, and that makes it hard to know if their requests are genuine or not.  At the same time, many university students go off the rails and get into bad behaviour, drugs and alcohol.  Therefore, a cry for help might just be a ploy to get drinking money.

Ten days ago, Alan, whom I had assisted in a small way back in 2017, called me over the phone.  His name still came up in my phone contacts, so I could honestly say I remembered him – thank God for technology making us smarter than we might otherwise be!  After his initial gambit asking for help, I said I would call back later because I was working with a surveyor on a mountain.  Later became the next day, when I just sent a text message asking for his dad’s phone number (he complained his dad was not communicating or assisting him) – the number didn’t pick up.  The next day, Sunday, after assisting at the parish Masses, I called him again.  I challenged him about why he wants to waste money coming home when he can study with less distraction in Nairobi – the University was closed due to the coronavirus.  He tried to tell me life was too hard there. “Do you really know what is happening in Nairobi, Father?”  I replied that I did.  After a bit more conversation, he could see I was not taking his side, so he ended the call with the words (not unpleasantly): “I’m sorry I called you Father,” and then he was gone.  Ouch, that hurt!  I was a bit troubled as I prepared to return to Nairobi.

But just as I entered the car, a motorbike appeared with Jason, one of my parishioners.  We chatted for a while, before I asked him if he knew Alan.  He called several people and discovered a few more details about Alan’s family.  Turned out Alan’s dad was a local alcoholic, his mum was deceased, his step-mum ignored him. It was grandma who was paying the university fees. Between 2017 and recently, Alan had been working part-time to support his living expenses, but the job was over and now he wants to come home, for good, because ‘it’s just too hard’ (he has one year to finish his 4 year degree).  After all that sank in, I realized that I cannot allow Alan to pull out of University. Jason promised to consult the family and the local Chief to see what can be done.  The Chief has been assisting the elderly grandma to transfer the fees each semester.

I headed off to Nairobi and later sent Alan a bit of money so he could eat while he waits for the local Chief and Jason to work a bit of magic.  The next day Jason called and shared that the Chief will summon the family and sort out a solution.

Next step was to call one of the leaders of Oblate Youth, Nairobi (OYN) and ask if they knew him.  Geoff said, “I do, and, in fact, he and I were in the same baptism group!”  I asked Geoff to call Alan to encourage him and tell him: “Giving up University is not an option he should choose.”  Geoff reported back that Alan was feeling better and he was now determined to complete the University studies.

We are all locked down for the coronavirus, but that does not mean God is sleeping, and nor should we be.  “We can work from home.”  I do know that the Holy Spirit sent Jason into my path at just the right moment, and Geoff’s generosity has grown because of OYN.

I think, with God’s help, we may have “untied him, and let him go.”

Notes:  Names and places have been changed to protect people’s privacy.

Everything will be fine.
Oblate Missionary Sisters among the Sick and Dying