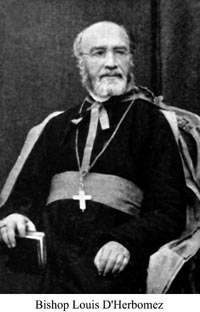 Louis D’Herbomez was born in Brillon, diocese of Cambrai, France, on January 17, 1822. His parents were Louis D’Herbomez, blacksmith farrier, and Marie Alexandrine Bricquet. Having studied in the minor and major seminaries in his diocese, he began his novitiate in Nancy on November 20, 1847 and took vows there on November 21, 1848. In a report on the novices made in June 1848, Father Jacques Santoni wrote: “He is a young man full of good qualities. I am not exaggerating when I say that he is a saint: pious, charitable, humble, obedient, totally devoted, attached to his vocation, very solid, blessed with good health and almost Herculean strength. What a good candidate for our missions in either America or Asia! I believe his place to be there. He may not have great talent but nevertheless he has enough and that is combined with plenty of common sense. He would have more if he had begun his studies a little sooner. He was a blacksmith until he was eighteen years of age and then, on the advice of an assistant priest, he decided to enter the minor and then the major seminary where he did one year of theology and received the tonsure.”

After one year of theology with the scholastics in the major seminary of Marseille in the period 1848-1849, he was ordained to the priesthood by Bishop de Mazenod on October 14, 1849. Immediately after his ordination he was sent to Oregon and he arrived in the mission of Olympia in Washington State in 1850. The following year he went to found the mission of Saint Joseph in Ahtanum among the Yakima Amerindians (1851-1853), and then he returned to Olympia and spent some time visiting the Amerindians on the shores of Puget Sound. His signature appears on the registers of Ahtanum in 1851-1853, 1856, 1858 and of Priest Point, Washington, (1854-1857).

He was appointed visitor extraordinary (Provincial) of the Oregon missions and British Colombia in 1856. He established his dwelling at Esquimalt, Vancouver Island (1857-1864). His is the credit for having founded the mission of Sainte-Marie in Mission City in 1860 and the establishment of schools for the Amerindians.

Having been appointed titular bishop of Miletopolis and Vicar apostolic of British Colombia on December 22, 1863, he received Episcopal ordination in Victoria on October 9, 1864, the ordaining prelate being Archbishop François-Norbert Blanchet of Oregon City. The new bishop took possession of his see on October 16, 1864 and established his residence in New Westminster. In 1866 he founded the mission of Williams Lake and then, in 1868, that of Stuart Lake. He attended the Vatican Council in 1870 and was held up in Nancy at that time because of the Franco-German war.

In 1874 he opened the mission of the Kootenays in Cranbrook and then, in 1878, the mission of Kamloops. It has been stated that between 1864 and 1868 he opened 55 chapels. During the last years of his life, he founded a hospital in New Westminster and entrusted it to the care of the Sisters of Saint Anne. He also founded a parish in Vancouver.

At the time of his death, he left eight establishments, 21 churches in stone or timber, 50 oratories where the Amerindians regularly held their prayer assemblies, the Saint Louis College which was transferred from Victoria to New Westminster, a boarding school for girls, primary schools in all the stations where there were missionaries and two Indian schools in Mission City He had been vicar of mission for thirty years (1858-1888).

Bishop D’Herbomez had chosen as his Episcopal motto: Si Deus pro nobis, quis contra nos (If God is with us, who can be against us). A stream and a mountain are named in his honour: Saint Louis. The Lake Louis in British Colombia also bears his name as does an island in the Nottaway River, Quebec, and a plaque in Saint Mary’s Academy in Victoria perpetuates his memory. He is buried in Mission City.

The author of the necrology note in the 1890 issue of Missions OMI, wrote: “The government of Bishop D’Herbomez was stamped with a kindness which might be termed excessive but which it would be more correct to call paternal. In his administration there was always a measure of tolerance. His sense of duty sometimes overcame his love of peace and his natural shyness and in those circumstances he scolded quite severely and he spoke or wrote with the firmness of authority but there was always in his words or writings the feeling that they came from the heart and even when he was severe, it was always with a sense of kindness and an expression of tenderness … As for his love for the Congregation, there were no limits to that. The thought never struck him that he could be anyone or anything without it; he would be even less tolerant of any complaint or questioning against it…” (pp. 389-390).