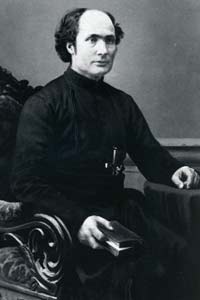 Joseph Fabre was born in Cuges, diocese of Marseilles on November 14, 1824, son of Lucie Rosalie Pignol and Alexis Lazare Fabre, wool carder. Joseph was about four years old when his father died and was ten when his mother died. He lived alone with his sister Marie-Lucie who died in 1837 after preparing her brother for his First Holy Communion September 11, 1836. It was Bishop Eugene de Mazenod who confirmed Joseph Fabre January 17, 1838 after a parish mission preached by the Oblates in Cuges.

One of Joseph’s relatives, Antoine Bonifay, who was mayor of the commune at the time, accepted to become his legal guardian. On Joseph’s behalf, he applied for and obtained a government grant to attend the state supported secondary school of Marseilles. It was at that school from his 14th to his 19th year that the young man had a brilliant academic career. He left there with a Bachelor of Arts degree and the award for first prize in philosophy.

Seminarian and Oblate (1842-1861)
Some friends suggested that he should enrol in the surgeon’s corps of the navy. He soon took an aversion to the studies demanded of him there. After following a retreat with the Jesuits of Avignon, he entered the major seminary of Marseilles on October 18, 1842. In the course of his first two years of theology, he made the decision to become an Oblate and received the habit at the hands of Bishop de Mazenod at the seminary in Marseilles on February 16, 1844. He then spent one year of novitiate at Notre-Dame de l’Osier where he made his oblation on February 17, 1845.

He immediately returned to Marseilles to take up again his second year of theology until the end of the school year of 1844-1845. He continued his study of theology in the school year of 1845-1846 while teaching philosophy at Notre-Dame de l’Osier to some ten scholastic brothers and at the major seminary of Marseilles in 1846-1847 functioned as treasurer of the house and assistant professor of dogmatic theology.

After his ordination to the priesthood at the hands of Bishop de Mazenod on May 29, 1847, he remained at the major seminary at Marseilles until 1861, as professor of dogma from 1848 to 1852, as professor of moral theology from 1852 to 1854, superior of the major seminary and honorary vicar general from 1854 to 1861. At the same time, he was chaplain for the Sisters of St. Charles, treasurer general and treasurer of the province of Midi from July 2, 1851 on.

As professor at the seminary, he published two works: Tractatus de religione revelata, Marseilles, 1852, 260 p. and Tractatus de vera Christi Ecclesia, Marseilles, 1853, 298 p. In Missions O.M.I. 1892, we read: “Those who had him for a teacher recognized in him outstanding abilities for teaching: orderliness and methodical treatment, lucid ideas and precise use of terminology, fluency in diction and a rigorous logic, accuracy in his work and a strict authority, but paternal in dealing with people who were deliberately conscientious, all the elements that contributed to making him loved and esteemed by his students.”

Superior General (1861-1892)
Bishop de Mazenod died on May 21, 1861. Already on May 25, Father Tempier called a General Chapter for December 5 at Montolivet. Because of the backlash in Marseilles against the departed Bishop de Mazenod, the chapter was actually held in the Oblate house in Paris. Father Tempier entreated the members of the chapter not to consider him for the task of Superior General and Bishop Guibert, Archbishop of Tours advised them not to choose a bishop for that office. In the first vote, Father Fabre was elected with 19 out of 20 possible votes. He was only 37 when he succeeded Bishop de Mazenod in the double responsibility of Superior General of the Oblates and Director General of the Holy Family of Bordeaux. But for 17 years he had worked at the side of the Founder and Father Tempier, both of whom esteemed him and passed on their spirit to him. No doubt, the people Bishop de Mazenod had prepared to succeed him were either Father Casimir Aubert or Father Charles Bellon. But Father Aubert was Secretary General and provincial of Midi province and he died January 17, 1860. Father Bellon died June 28, 1861 while he was pro-director of the Holy Family in Bordeaux.
First and foremost, Father Fabre had to deal with a painful situation in Marseilles in the face of a violent reaction to the administration of the departed bishop’s who was especially being accused of having muddled the material interests of the diocese with those of the Congregation. He paid Bishop Cruice, the new bishop of Marseilles, a few visits during the course of which they arrived at a settlement which sorted out in definitive fashion what was owned by the Oblates and what was owned by the diocese. It was deemed as well that the Oblates held too much power in the diocese. Father Fabre accepted to hand over the direction of the major seminary to the Lazarists. He established the general house in Paris, closed the scholasticate at Montolivet and found shelter for the scholastic brothers at Autun, etc.

The Oblates stood in great solidarity with their new Superior General, but the Congregation was suffering from a number of problems: lack of communication between the missions and Marseilles, especially since the death of Father Aubert, a lack of sufficient time given to the formation of young Oblates and a lack of depth in that formation, too many foundations throughout the world. Within a few years, Father Fabre adopted precise measures to remedy these ills. His biographers very accurately record: “On the heels of foundation comes organization. Initiatives to organize things must be undertaken methodically and in orderly fashion. That was the overriding quality possessed by our second Superior General. He had a steel trap memory for the past and farseeing wisdom for the future. He had a sure and swift grasp of things, an immediate overall grasp of the situation in its smallest details, a spirit of regularity bordering almost on clockwork. Such was the Very Reverend Father Fabre. Very sensitive with regard to other people’s actions; he always remained the master of his own reactions. He never allowed himself to be carried away by anything, but by that same token he never shirked a challenge either…”

To improve the relationships among the missionaries, Father Fabre founded already on April 3, 1862, the quarterly, Missions O.M.I. in which were published four times a year the accounts and letters received. In the last issue of each year appeared the list of oblations and of deaths. He then issued two series of circulars. Thirty-four appeared from 1862 to 1890 especially dealing with observance of the Rule and the religious life of the Congregation and one hundred and thirty-four contained obituaries of our Oblate dead from no. 7 (Father Pascal Ricard) to no. 141 (Father Tabaret). These letters make up the first five volumes of Notices nécrologiques.

The Superior General followed closely the formation of the scholastic brothers and kept a watchful eye on the maintaining of a fervent religious life. He often visited the scholastic brothers at Autun until the closure of that house in 1880. He saw to the drawing up of a directory for juniorates, novitiates and scholasticates, as well as for parish missions. He often made canonical visits of the houses in France and visited England on three occasions (1863, 1866 and 1881). He sent his assistants to visit the Oblate houses in North America, Africa and Ceylon. He organized annual retreats in the provinces and retreats for superiors, usually in Autun.

During his term of office, several houses were opened in Europe and North America, but Father Fabre did not accept any new mission fields except for the German colony of Southwest Africa, the condition of the acceptance of which was that a province would be established in the German empire. This was a time of major development for the Congregation. It went from about 400 Oblates in 1861 to 1339 in 1892 (10 Bishops, 648 priests, 201 scholastic brothers, 91 scholastic novices, 352 lay brothers and 37 lay brother novices).

Father Fabre took as great an interest in the Sisters of the Holy Family of Bordeaux as he did in the Oblates. Among other things, he preached the annual retreat of their General Administration from 1864 to 1875. The conferences he gave were published in two series of works: Instructions à l’usage des Sœurs de la Sainte-Famille, Bordeaux, 1915, 3 volumes and Instructions pour retraites annuelles, Rome, 1917, 556 p.

On December 5, 1886, they celebrated his 25 years of superiorship, but his strength was failing. He had indeed undergone some harsh trials: in Marseilles in 1862, in 1870-1871 during the Franco-Prussian war and the revolution which scattered the novices and the scholastic brothers; in 1880 during the expulsion of religious from their houses. His health had always been fragile. He suffered from anaemia. In July of 1892, while he was resting at Royaumont, gangrene developed in his foot. His health declined rapidly and he received the Sacrament of the Sick on September 20. He died October 26. His funeral rites were celebrated the next day in the chapel of St. Louis’ Abbey and then on October 28 at the General House on Saint-Pétersbourg street in Paris. His body was laid to rest in the Oblate vault in the cemetery at Montmartre.