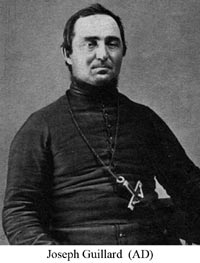 Joseph-Marie Guillard was born on July 5, 1833 in Matignon, diocese of Saint-Brieuc, France. His parents were Eusèbe Guillard and Marie Terostin. After his studies in the minor and major seminaries of Saint-Brieuc, he began his novitiate at Notre-Dame de l’Osier on October 10, 1855 and took vows at Montolivet on November 2, 1856. The general council had admitted him to religious profession on the preceding October 24 with the following comment: “His is an altogether straightforward spirit, according to Father Vandenberghe, and he ardently wishes to do good. His vocation is solid. He is very shy and often needs to be reassured. He is good and generous. I am sure he will make an excellent Oblate.” After a year of theology at Montolivet he received his obedience for the scholasticate in Sicklinghall in June 1857 and there he was ordained priest on December 8 of the same year.

In his report on the house of Saint Joseph, Lowell, in 1904, Father Pierre Brullard wrote: “We regret not having spoken of the death (May 31) of the excellent Father Guillard, who had retired one year ago to the novitiate in Tewksbury. He was one of the first to come to the aid of Father Garin. He had governed the Province and always been an example of all the religious virtues. His death was the crowning of his life.” He was buried in Tewksbury, Massachusetts.