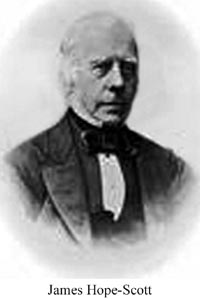 James Robert Hope, afterwards Hope-Scott, was born at Great Marlow, Buckinghamshire, on 15 July 1812. The Hopes were an old Scottish family that was raised to the peerage in 1703. James’ uncle was the Earl of Hopetoun. His father was a distinguished soldier who established the military college at Sand Hurst and James lived there from 1813-1819. Thereafter he was with his parents on their travels to Germany and Italy. He returned to England to attend Kepyer Grammar School and then Eton College where he had the customary classical education. He went up to Christ Church, Oxford in December 1828, studying ethics and philosophy (1828-1833). One of his contemporaries there was William Gladstone the future prime minister and he was later his close friend, until his conversion. During his first year he is described as “conspicuous amidst a brilliant throng of the noble youths of his time”. This was followed by a marked change, “a disquiet and dissatisfaction with life”, leading to his becoming a ‘High Churchman’. He thought of taking orders in the Church of England: it was his mother’s wish. In April 1833 he was elected a Fellow of Merton College. “The ensuing three years of Mr. Hope’s life…form a period full of uncertainty and wavering as to his future career, anxiety as to his religious state, and deep suffering from the sickness or deaths of relatives whom he dearly cherished.” In the spring of 1834 he joined his brother in chambers in Lincoln’s Inn and commenced legal studies. Again he began to think of taking holy orders. His studies for the Bar were frequently interrupted. One of these interruptions was a period in Dublin where he went to assist his cousin Thomas, Earl of Haddington, who was Lord-Lieutenant of Ireland. Two of his three brothers died at this period. His London home was now with his parents in the Chelsea Hospital of which his father was Governor until his death in 1835. By this time he was being deeply influenced by the Tractarian movement. From 1836 began a close friendship with Gladstone and also with Edward Badeley, a lawyer and a prominent Tractarian who afterwards, as a Catholic, was one of Dr. Newman’s counsels in the Achilli trial. In January 1838 he was called to the Bar in the Inner Temple. While he did some small practice in the ecclesiastical courts, he began the same year to appear before committees of the Houses of Parliament. It was however in 1843 that his career as a Parliamentary barrister really commenced. It was the great epoch of railway legislation, and from this he made what is described as an “enormous” income.

In October 1838 he called on Mr. Newman in his rooms at Oriel and they immediately became close friends – Robert Ornsby says that this “was indeed the great friendship of Mr. Hope’s life from 1838 to the hour of his death». It signals James’ growing understanding of ‘catholicity’ and gradual disenchantment with the Anglican Church. The matter of the Anglo-German Jerusalem Bishopric in 1841-1842, on which he wrote a pamphlet, influenced him greatly. After a lengthy period of hesitation, he was received into the Catholic Church together with Manning at Farm Street, London, on 6 April 1851 by Father J. Brownbill, S.J.

Meanwhile in 1847 he married Charlotte Lockhart, granddaughter of Sir Walter Scott. In 1848 he rented Abbotsford, the Tudor and Scottish baronial house that Scott had built for himself in Roxburghshire, from his brother-in-law Walter Lockhart Scott. On the death of the latter in 1853 he became its possessor in right of his wife and for the remainder of his days made it his principal residence. Newman visited him there for some 5 weeks during the winter of 1852-1853.

It was at this time the Oblate connection with Hope-Scott arose when the Oblates accepted the proposal of Bishop Gillis to take on a mission in Galashiels, which was close to Abbotsford. James had already erected at Galashiels a temporary chapel for the local Catholics. He now agreed to “furnish a large house to accommodate six to eight priests to form a mission centre, to provide a theological library and to have the community in undisturbed possession of this property as long as they fulfilled the terms of the agreement.” (Denny p.79). The agreement was signed on 31 December 1852. By 1857 he had replaced the temporary chapel with a new one dedicated to Our Lady and St. Andrew. This was but one of many benefits conferred on the Church in the Scottish Borders by James: indeed throughout his life he had been a most generous giver to charity. James’s wife who had followed him into the Catholic Church fell ill and died on 26 October 1858. Ornsby writes: “Bishop Gillis gave her the last absolution, Fr. Noble, one of the Oblate Fathers from Galashiels assisting.” (p.162). Not long after this the Oblates left Galashiels. In an apologetic letter dated January 1859 the Founder explained the decision to Hope-Scott and said that the Oblates would leave by Easter of that year. Rey records that the Founder had met Mr. Hope in London in early July 1857 when the founder made his second visit to the province. [Vol.2 p.644]

In 1861 Hope-Scott was married again, to Lady Victoria Howard, sister of the Duke of Norfolk. He died in London on 29 April 1873. Ornsby does not record any Oblate presence at the Requiem Mass on 5 May 1873 at which Cardinal Newman preached a lengthy sermon that is printed in full by Ornsby. He was buried in the vaults of St. Margaret’s Convent, Bruntsfield, Edinburgh, on 7 May 1873. He was, in the words of Cardinal Newman, “ ‘a great soul’, a man of ‘rare excellence’, who foreswore a great public career to ‘aim at doing good of a nature more distinctly religious, at works, safely and surely and beyond all mistake meritorious; at offices of kindness, benevolence, considerateness, personal and particular; at labours of love and self-denying exertions, in which the right hand knows nothing that is done by their left… He was one of those rare men who do not merely give a tithe of their increase to their God; he was a fount of generosity ever flowing; it poured out on every side; in religious offerings, in presents, in donations, in works upon his estates, in care of his people, in alms deeds.”

His sister Louisa Dorothea married Lord Henry Kerr and they and their children visited the Founder in Marseilles in 1859. Lord Henry Kerr was an Anglican clergyman who became a Catholic soon after James did. In his letter to James the Founder mentions “Hyères”. Ornsby tells us: “From 1859 it was thought necessary that the surviving child of his first marriage should spend every winter in a warm climate. Hyères, in the south of France, was selected for this purpose, which led to Mr. Hope-Scott’s purchasing a property there, the Villa Madona, on a beautiful spot near the Boulevard d’Orient…”