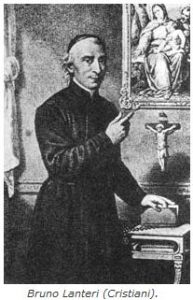 Pio Bruno Lanteri was born in Coni (Cuneo) on May 12, 1759. He was ordained to the priesthood on May 24, 1782 and received a doctorate in theology in Turin on July 13 of that year. He was among the first of those priests who offered their services to Pius VII during his internment at Savona. After the fall of Napoleon, he collaborated in the founding of the institute of the Oblates of the Virgin Mary. (See article: Oblates of the Virgin Mary) He was the director of this institute from 1817 until his death on August 5, 1830. He worked energetically for reform among the Italian clergy.

Father de Mazenod wrote at least two letters to Father Lanteri and met with him four times in 1825-1826. In the course of his journey to Rome to obtain approbation of the Rule, the Founder stopped in Turin from November 7 to 14, 1825. From 1824 already, he was in contact with the ecclesiastical authorities in Turin to obtain the abbey of Saint-Pons at the city gates of Nice. With regard to this matter, he wanted to consult with his friend Luigi Provana di Collegno and also with the theologian Guala to whom he had been recommended. Upon his arrival in Turin, he went to see the theologian Guala. He met there a few priests who were members of the Oblates. After a few years of existence as a society, in the face of too many obstacles put in their path by ecclesiastical and civil authorities, they had dissolved the institute.

Shortly before his departure from Turin, Father de Mazenod met Father Lanteri. From Genoa, on November 16, he wrote to Father Tempier: “I did not have time to finish my letter at Turin because the great theologian Lanteri, having arrived, asked me for the favour of granting all the free time that I would have before my departure. There was altogether so much to gain from his conversation that I had no trouble in granting him a favour from which I ought to derive more benefit than he. This holy, good and wise person is the master, friend and superior of the other theologian, Guala, of whom I have spoken to you in my other letters. From the first moment of our first interview, I prompted in him as much affection and confidence as I experienced veneration for him. It was so to speak a repetition of what took place with Dom Guala, with the difference that being head and master, he put no limit to the marks of confidence that he gave me. Had I come to Turin only to see these two men, my time and the money of my uncle would have been well employed. I cannot tell you in writing what was the subject of the ten or twelve hours of these conferences; the subject was worth the trouble…” (Oblate Writings I, vol. 6, no. 207, p. 196-197) The “subject” of this long interview dealt with the project of union or fusion of the two societies. Welcoming into his society a number of Italian members (at the time, Father Albini was the only Italian) would have enabled Father de Mazenod to accept the abbey of Saint-Pons where the authorities wanted Italian speaking priests.

This project of union sheds some light on a whole series of initiatives and actions of the Founder in Rome. First of all, in a letter to Cardinal Pedicini, Father de Mazenod stated that approving the congregation exclusively for France would not be sufficient. The institute was planning to work in the area of Nice, Savoy, Sardinia and in the foreign missions. He subsequently earnestly urged the Pope and Cardinal Pedicini to change the name from Oblates of Saint Charles to Oblates of Mary Immaculate. In the March 21 brief of approbation of the Rule, one of the ends of the institute which was not mentioned in the Rule suddenly appeared: education of clerics in major seminaries. The Founder had that added because, at the time, his uncle Fortuné was offering the Oblates the direction of the major seminary in Marseilles. An additional reason was, without doubt, the fact that Father Lanteri had always worked in the spiritual formation of the clergy.

After having obtained approbation of the Rule on February 17, Father de Mazenod received a letter from Father Lanteri in which he explained that the union could not take place. His confreres opposed the project of union and were in the process of seeking pontifical approbation of their society. In a March 1 letter which did not abandon hope for this project, Father de Mazenod responded: “I continue to believe that we must examine before God whether the project that you entertained for a short time might not be advantageous for everyone.”

In April, Father Lanteri arrived in Rome seeking approbation of the Oblates of the Virgin Mary. The two founders met on April 20, 22 and 24. On his return trip, Father de Mazenod stopped over in Turin for two weeks. On May 24, he explained to Father Tempier why the project for union failed. “I think no more of those whom I saw on my way down. The head is a man of the greatest merit but he is aged and weakened and led by the nose by one of his three or four companions. Their method, to which they cling obstinately, could not be employed by us; they only give retreats of eight days and they do in those eight days what we would have difficulty doing in thirty…”(Oblate Writings I, vol. 7, no. 242, p. 100)

On June 13, 1827, Father de Mazenod wrote once again to Father Lanteri. It was a friendly letter in which he inquired whether it was possible to sell in Piedmont, where French was rather commonly spoken, copies of the life of Blessed Alphonse de Liguori, a work which had been translated by Father Jeancard.