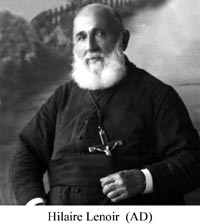 Hilaire Lenoir was born in Boichot, near Dôle, diocese of Saint-Claude, France, on April 30, 1836. His parents were Claude Lenoir and Jeanne Rippard. He studied in the Jesuit College in Dôle and began his novitiate at Notre-Dame de l’Osier on October 31, 1855. He took vows in Montolivet on November 2, 1856. Father Vandenberghe, master of novices, noted that this scholastic had not done rhetoric but “he has an excellent disposition, open, candid, great gentleness, a happy and jovial character, etc.” Before sending him to Marseille, in September 1856, he wrote: “he has the material to make a precious subject. I do not believe hat his talents are extraordinary but his external qualities are ten times more valuable; full of humour but moderate and wise, he is capable of doing much. What I most like about him is his intelligence and his docility. He produced only what I allowed him to do. I also liked his dedication and his application. All he needs is to have support and direction. As regards piety, that is something new to him, and yet he is one of those who have the best understanding of their religious obligations.” He studied theology in Montolivet (1856-1860) Bishop de Mazenod ordained him to the priesthood on June 24, 1860.

Father Lenoir received his obedience for England and he ministered in Inchicore (1860), Liverpool (1862) and Sicklinghall (1873). He was in Leeds when he was assigned to Natal in 1876. He set out in the company of three Sisters of the Holy Family of Bordeaux, He ministered in Bloemfontein (1876), in Kimberley (1878) and in Basutoland (1888-1890). In his Réminiscences et Souvenirs (p.6) he wrote: Bishop Gaughren sent me to Basutoland for temporal matters. I fond in Roma Mission a school for boys under the direction of Brother John Philip Mulligan. These young native boys were lodged, clothed, fed and taught gratis. I pointed out to the reverend Father Marcellin Deltour, principal of the district, that it would be a good idea to require the parents to give tow or three sacks of meal per boy each year to feed them. The priest informed me that it would be more likely to have to pay the parents who are being deprived of the labour of their children.” The Oblates’ ambition was to respond to all the needs of the native people in order to convert them. Reverend Father Louis Soullier, who came as visitor, put me in charge of the district. The Oblate Fathers and Brothers sent a petition to the bishop to ask that I be removed. I left Basutoland without regret.”

Following these events we find Father Lenoir in various missions which he himself indicates in a list of obediences: Bloemfontein (1890), Kimberley (1892), Harrismith (1893), Mafeking (1896), Kimberley (1897), Barkly West (1905), Harrismith (1911), Smithfield (1913), and Kimberley (1914). On the death of Bishop Gaughren in 1914, the Congregation of Propaganda appointed Father Lenoir administrator of the vicariate of Kimberley. He held that office for a very short time, until the arrival of Bishop Charles Cox, Vicar apostolic of Transvaal and administrator of the vicariate of Kimberley. The new administrator made him his vicar general, responsible for the temporal goods of Kimberley until 1916. From 1916 he worked in Jagersfontein and Bloemfontein. He concludes his Réminiscences with these lines: “In the second half of 1921, I experienced considerable weakness in my limbs and walking was difficult. My ecclesiastical and religious superiors, Bishop Cox and Father Porte, assigned me in retirement to the house in Bloemfontein where I arrived in January 1922 with the one responsibility of vicar delegate. I hope to take advantage of my last years to prepare for the solemn moment of final departure, when the Lord will call me. So be it!” He died on May 12, 1926, at the age of 90 years.

From his Réminiscences it is clear that, wherever he went, he exercised his ministry with zeal and he was mainly occupied with temporal affairs: the building of churches, schools, and convents.