Wanting to be closer to Montreal, the Oblates left Saint-Hilaire, their first house on Canadian soil, and went to Longueuil. On August 2, 1842, they took possession of a vast house, a former presbytery, which then belonged to the Berthelet family. Father Jean-Claude Leonard was very friendly with this family and he convinced Olivier Berthelet to make a gift of the house to the Oblates for a three-year period. Therese Berthelet, his sister, made a gift of five hundred louis to the Oblates to refurbish the house. The property was valued at eight hundred louis. Stone built, the house was two stories high and was considered to be the most elegant building in Longueuil. It had not been lived in for some years and was quite dilapidated and needed extensive repairs. Eugene de Mazenod showed his appreciation of this cooperation in a letter to Mr. and Mrs Berthelet, dated September 25, 1842. The house still exists. It is alongside the co-cathedral of Saint-Jean-Longueuil. 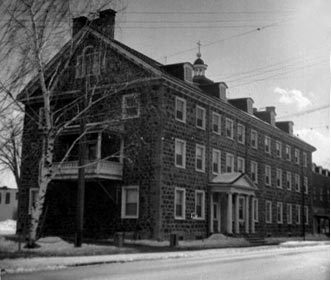 Longueuil was the launching pad for the Oblates in Canada. In 1842 they preached in the areas of the East. Fathers Telmon and Dandurand preached a mission in Corbeau, in the United States, in the state of New York, near the Canadian frontier, starting in October 1842. In January 1844, Father Adrien Telmon went to the town of Bytown, which became Ottawa in 1855. In May 1844, Father Pierre Fiset went to the Côte-Nord on the northern bank of the Saint Lawrence River. On May 14, 1844, Father Nicolas Laverlochère undertook his first mission in Témiscamingue. Later he was to go to Moose Factory, James Bay. In June 1844, Father Médard Bourassa set out for the Amerindian missions of Haut-Saint-Maurice. In October 1844, Father Jean-Baptiste Honorat established a residence in Saint-Alexis-de-la-Grande-Baie, in Saguenay. On June 25, 1845, Father Aubert and the sub-deacon, Alexandre Taché set out for Red River in Western Canada. Between 1845 and 1846, the Oblates preached about 100 retreats lasting from a few days to four weeks each.

Many French Oblates came to Canada in those years. Let us mention a few: Jean-François Allard, Nicolas Laverlochère, Alexandre-Auguste Brunet, Eugène-Bruno Guigues, Pierre Aubert and André Garin. Some of them were not yet ordained priests when they arrived.

While at Longueuil the Oblates played a significant role in the foundation of the community of Sisters of the Holy Names of Jesus and Mary. The foundress, Eulalie Durocher, was the sister of two Oblates, Eusèbe and Flavien, who did their novitiate in Longueuil. Father Adrien Telmon was the spiritual director of Eulalie Durocher while she was at Beloeil. At the end of October 1843, the foundress and two postulants began their spiritual formation under the direction of Father Jean-François Allard.

In spite of the importance which the superior general attributed to Longueuil, and his writings are evidence of that, the provincial administration, in its meeting of September 13, 1851, decided to sell the property to the factory of Longueuil. The deed of sale was not signed until July 13, 1854. On the suggestion of Bishop Ignace Bourget, the Oblates decided to establish themselves in Montreal in 1848. They did so in a poor area known as the suburb of Sainte-Marie or also as the Quebec suburb. There they opened a public chapel dedicated to Saint Peter the Apostle. This was to become the central house of the Oblates in Eastern Canada and as such it remained until 1951.