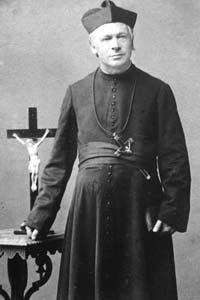 Jean Joseph Marchal was born at Aouze in the diocese of Saint-Dié on June 23, 1824. He entered the novitiate at Notre-Dame de l’Osier on November 7, 1847 and made his oblation at the major seminary of Marseilles on November 8, 1848. After one year at the major seminary to finish his theological studies, he was ordained to the priesthood by Bishop de Mazenod on June 24, 1849.

He was immediately appointed spiritual director of the scholastics at the major seminary of Marseilles, a position he held until 1853 while he taught Sacred Scripture in 1849-1850, philosophy in 1850-1851 and liturgy from 1850 to 1853. In 1854, along with Fathers Dassy and Brun, he was sent to Cléry to the parish and Marian shrine which the Congregation had just accepted at the request of Bishop A. P. Dupanloup, the bishop of Orleans. He remained there until the departure of the Oblates in 1865. He always worked in the parish, but he often preached parish missions and retreats. From 1865 to 1870, he preached in several dioceses, especially in Limoges and Tours. He was superior and parish priest at Talence from 1870 to 1877; then he was superior and parish priest at Saint-Jean at Autun from 1877 until his death in 1890.

On February 13, 1890, he was suddenly stricken with paralysis. He was immediately given the Sacrament of the sick. He died on February 17. Well known and well loved in Autun, his funeral rites were a kind of triumphal celebration. His chronicler in Missions O.M.I., (1891, p. 371) wrote: “the huge church of Saint-Jean was crammed full. The parish priest of Notre-Dame officiated. The archpriest of the cathedral delivered a visibly emotionally laden eulogy and for our admiration painted a picture of our priest as a friend of children and a father of the poor. The presence of the children and the poor were a concrete illustration of the truth of the eulogy and drove its moving message home in the hearts of everyone. The Vicar General, Mr. Mangematin presided at the final commendation. Then, an endless procession made up of canons, priests, religious women, friends, parishioners, children and the poor accompanied the body of their so sadly missed Father Marchal to its final resting place…”