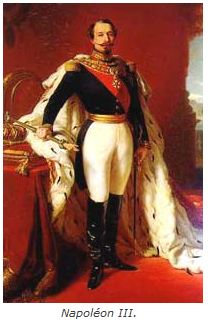 Charles Louis Napoleon Bonaparte, the third son of Louis, king of Holland and the queen Hortense de Beauharnais, was born in the Tuileries in 1808. After an adventurous youth, he tried without success to overthrow Louis Philip, then took refuge in England. The turmoil of 1848-1849 opened to him the paths to power. First elected to the Assembly and then to the presidency of the Second Republic (see Republic), he achieved his purpose by a coup d’état on December 2, 1851. The plebiscite of November 21 and 22, 1852 proclaimed him Emperor of the French under the title of Napoleon III (December 2, 1852).

During the first ten years of his reign, the relations between Napoleon and the religious authorities were excellent. In addition to that, knowing that the popularity he enjoyed at Marseilles was limited, he showed favour to the city and worked to gain the good will of the people of Marseilles and the friendship of the bishop.

Bishop de Mazenod met the Emperor on more than twenty occasions. The 26 and 27 of September of 1852, Louis Napoleon, who was passing through Marseilles, laid the cornerstone stone of the future cathedral, announced a government grant of 2,500,000 francs for its construction and bestowed on the bishop the insignia of Knight of the Legion of Honour. In 1856, on the occasion of the birth of the imperial prince, on March 16, Bishop de Mazenod sent the Emperor a golden medal with the image of the Blessed Virgin and of Notre-Dame de la Garde. He was subsequently present at the baptismal ceremony of the prince on June 14, and, on June 24, he was appointed senator. Following that, during his stays in Paris in February and March of every year to attend the sessions of the senate, Bishop de Mazenod met with the Emperor several times, either in private or public audience. Almost every Sunday, he went to attend Mass at Les Tuileries. During the Mass of March 20, 1859, he noticed that the Empress had fits of heavy coughing. He sent her some lozenges made in a Sisters’ pharmacy in Marseilles. As well, he met the Emperor who was passing through Marseilles on May 1l, 1859, then on the 8 and 9 September 1860. In the month of August 1859, Napoleon III presented the name of Bishop de Mazenod to Holy Father as a candidate for the cardinal’s hat.

We have some twenty letters from Bishop de Mazenod to the Emperor Napoleon III and a few replies from the Emperor. On November 8, 1852, the bishop wrote him on the occasion of the re-establishment of the Empire. He proclaimed his dedication to the Emperor and called down God’s blessings on him. Napoleon responded on November 13, thanking him for the welcome he received at Marseilles and telling him that he saw with pleasure the clergy sharing in the national sentiment of blessing and strengthening him. In 1853, 1854 and 1860, Bishop de Mazenod asked the Emperor to provide money for the construction of Notre-Dame de la Garde. In 1856, several letters dealt with the birth of the imperial prince and his own appointment as senator. On October 22 and December 31 of 1859, the bishop of Marseilles confided to the Emperor his concern about war in Italy. He begged him to take up the defence of the Pope and the Papal States. This correspondence with Napoleon always maintains the same tenor: a wholly spiritual motivation, frankness and clarity on what Catholics expect in return for their support.

When, in 1859, Napoleon’s political program in favour of the unity of Italy and the reduction of the Papal States became evident, Bishop de Mazenod stepped into the breach to defend the rights of the Pope and of the Church. He redoubled his zeal even when the French episcopacy was hesitant. Nevertheless, within the limits of what was possible, and like the Holy See, he strove at the same time not to allow himself to be influenced by personal and local interests, not to act out of resentment and not to stir up public opinion and not to create a Catholic front of opposition that would have had a two-fold tragic effect: the loss of the Papal States and the loss of freedom for Catholics in France. This way of proceeding, like every balanced approach, was subject to conflicting interpretations.
Napoleon III died in England in 1873.