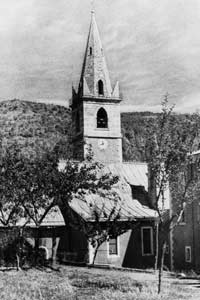 In August 1818, Father de Mazenod received an urgent letter from Fr. Charles Antoine Arbaud, the Vicar General of Digne, in which the latter offered him the direction of the shrine of Notre-Dame du Laus which is located near Gap.

This unexpected offer brought the Founder a whole new problem. Even though his plan included the evangelization of Provence, he had up to now envisaged only one single community of missionaries, located in the house at Aix.

He consulted with his limited band of missionaries; he also gave them to understand that, if they were to respond to this call to establish another community in another diocese, it was necessary to broaden the community’s program and to begin preparing real Constitutions and Rules.

With the enthusiastic support of his confreres and the authorization of the Vicars Capitulars of Aix, the Founder left for Saint-Laurent-du-Verdon where, from September 2 to 16, he composed the essential content of the Constitutions and Rules of the Missionaries of Provence. From there he went to Digne and to Gap where he signed an agreement with Bishop François-Melchior de Miollis and arranged a lease with the abbé Peix, who owned the monastery. By these agreements, the Missionaries of Provence became parish priests of Notre-Dame du Laus, were responsible for directing the shrine, and were to preach missions in the Hautes and Basses-Alpes regions.

Father Henry Tempier was assigned to this foundation, and he arrived at Laus on January 8, 1819. On the following Sunday, January 10th, M. Peix, parish priest of Gap, came to install him as rector of the shrine. Scholastic novice Hilarion Bourrelier and a Brother postulant Claude Ignace Voitot had accompanied the superior to Laus. Father Jean-Joseph Touche, a native of the diocese of Digne who had been ordained priest shortly before, came in February to complete this Oblate community. 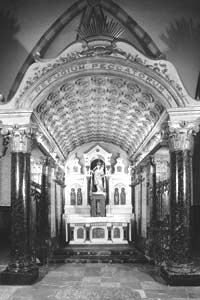 Father de Mazenod had agreed to keep at least two Fathers constantly at Laus to serve the parishioners and the pilgrims. In fact, there was nearly always a real community there of at least three or four Fathers and Brothers. During the summer, some Fathers, usually Oblate professors from the major seminary of Marseilles, came to Laus for a rest and to help out during the days when there was a great influx of pilgrims. With very few exceptions, all the Fathers of the first generations of Oblates passed at least temporarily through Laus, either as students or novices, confessors or preachers. Some of them even stayed there for a number of years, e.g. Fathers Touche, François Hermitte, Joseph-Alphonse Martin, Pierre Pélissier, Joseph Gignoux and others.e
Laus received the Congregation’s postulants and novices from June 1820 to October 1822, then from 1832 to 1833, and again in 1835-1836.

Community life was fervent under the direction of Fathers Tempier and Guibert, especially when the novices were there. Thus, for instance, it was the influence of Father Tempier and the novices of Laus that moved the 1821 General Chapter to make the vow of poverty obligatory in the Congregation. Later on, during the Chapter of 1831, the then superior of Laus, Father Guibert, advised the Founder that “some of our men be sent to the foreign missions…”

Still, the annual canonical visitations made either by the Founder or by Father Tempier pointed out quite a few failings in regard to the Rule. This was especially the case during the decade of 1830-1840 when a certain number of the diocesan priests were coming either for a rest or to make a retreat: this had a detrimental effect on the community’s regularity which was already much reduced from November to April each year, months that were dedicated to the preaching of missions.

The Shrine and its Pilgrims
The Blessed Virgin Mary in 1660 had appeared for the first time to a young shepherdess, Benoîte Rencural (1647-1718), a native of Saint-Etienne-d’Avancon. For more than 50 years Mary was in frequent communication with Benoîte. In August 1664, the Blessed Virgin manifested her desire to be honoured at Laus where there was an old auxiliary chapel dedicated to Notre-Dame de Bon-Rencontre. A church was built there between 1666 and 1669 and, in the 18th century, a monastery. Benoîte’s exemplary presence and, later on, the zeal of the shrine guardians, especially the Priests “de Sainte-Garde”, who were at Laus from 1712 to 1791, attracted many pilgrims and made this location the site of countless graces and favours.

Here, as elsewhere, the Revolution accomplished its destructive work against religion. The Gardist Fathers were expelled in October 1791, and the church and monastery were sold by auction.

After he had been appointed to Digne in 1805, Bishop de Miollis at his own expense bought back the church and the presbytery; the abbé Peix did the same for the monastery, paying for it by means of a collection made among the priests of the diocese. The shrine was served by a diocesan priest. Many parishes were without a resident priest and so Bishop de Miollis was looking for a community to look after Laus. He had heard talk of his fellow-citizen, the abbé de Mazenod and of his Missionaries of Provence. So he decided to invite them to take Laus so that they could revive devotion to Mary and also bring the benefit of parish missions to the faithful of his diocese.

Father Tempier and, later on, Father Alexandre Dupuy made urgent reparations to the church and to the monastery. Fathers Guibert and Mille built the bell-tower which dominates the hill today. These building improvements, the presence of the novices and the élan given by the missions were factors that contributed to drawing new crowds of pilgrims, especially during the great summer feasts. The Founder mentions 20,000 pilgrims in 1818 and 50,000 in 1833. Father Mille, for his part, speaks of 1500 communions received in 1818 and 15,000 during the course of the later years.

Also, from 1836 onwards, Father Mille took the initiative of preaching an annual retreat for the faithful of the parish and the most fervent among the pilgrims.

The number of priests coming for a rest or to make a retreat during the summer grew during the time that Father Guibert was superior and remained on the average of some 10 per day. Father Mille was able to write to Bishop Louis Rossat on September 23, 1841: “An ongoing mission is in progress here at Laus, a mission that is most effective. It is a most manifest work of God; many wonders take place here.”

The Missions
At Laus, as everywhere else in France at that time, the Oblates were above all tireless mission preachers. They were constantly at work, preaching in the Hautes and Basses-Alpes, in Provence, Languedoc and Dauphiné. They regularly preached from November until Easter and, during the rest of the time, with the exception of the great feasts, they preached follow-ups to the missions and went out to help or to replace parish priests. In his long letter of September 19, 1841, to Bishop Rossat, Father Mille writes: “We have with watered with the sweat of our efforts most of your parishes. Besides our different services and spiritual exercises of all kinds that we have provided for your faithful, the number of nearly 200 missions is a witness that nothing was too much for us, neither stress of body nor solicitude of spirit.”

Departure
The agreements made in 1818 with Bishop Miolis and the abbé Peix were to last for 29 years; both sides, however, understood that they were binding themselves indefinitely (Mazenod to Bishop de la Croix, 19 December 1839).

The diocese of Gap was restored in 1823, with Bishop Arbaud as its chief pastor. His relationships with the Oblates were good in the beginning; thereafter, he made things rather difficult for them. He was a Gallican and a Jansenist; he contested Rome’s approval of the Oblate Congregation in 1826, and he especially disapproved of the moral teaching and practice of Oblate preachers and confessors. Further, while the dioceses of Gap and Digne were short of priests in 1818-1823, it did not take long before they had a good number of clergy. After 1830, Fathers Guibert and Mille became aware a number of the clergy were impatiently waiting for the 29 years stipulated in the contract to expire.

Bishop Arbaud died in 1836. Bishop de La Croix d’Azolette, his successor, urged on by a part of his clergy, asked Bishop de Mazenod in a letter of October 24, 1839, “to find, in his charity, some acceptable means to shorten the term of their tenure at Laus.” The Founder replied in the negative. The Bishop of Gap did not insist further but founded a Society of diocesan missionaries to whom he confided all the missions in the diocese. Bishop de La Croix left Gap in 1840 and was replaced by Bishop Louis Rossat, who took possession of his see in March 1841. At first he simply ignored the Oblates. Then, in September, he solved the problem by naming a parish priest for Laus and depriving the Oblates of all jurisdiction in the diocese. The Fathers had to leave the shrine at the beginning of October, except for Father Mille who continued to reside in the monastery.

The new rector of the shrine did not delay in announcing his intention to take possession of the monastery and that he would take the Congregation to court if he had to. So as to avoid a scandal, Bishop de Mazenod waived all his rights (letter of 15 March 1842) and Father Mille also left the diocese in April 1842.

The pilgrimage shrine at Laus has remained very active under the direction of the Missionaries of Laus, assisted by the Sisters of Saint Joseph of Lyon.