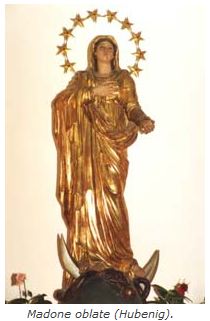 On August 15, 1822, Father de Mazenod solemnly blessed a statue of the Immaculate Conception in the church of the Mission in Aix. In the review, Missions O.M.I., of 1908, p. 279, we find the following deion: “Her head, crowned with twelve stars, is lifted toward heaven in an attitude of prayer. She wears a golden veil, the same colour as her long robe and her mantle. She is portrayed as the Immaculate Conception with one foot standing on the crescent moon and the other upon a serpent she is crushing. Her right hand is resting on her heart while her other hand is open, spreading graces on her children who are praying to her.”

After the blessing of the statue, Father de Mazenod remained alone in Aix. He wrote the following letter to Father Tempier, superior of the community of Notre-Dame du Laus: “The ceremony has just finished, very dear and most good brother, silence reigns in the house. It is broken only by the sound of a distant bell which announces the departure of the great procession. Satiated with the sincere tributes that we have just rendered to our good Mother, at the feet of the beautiful statue that we have installed as a souvenir of her in our church, I am letting the others take care of honouring her with the external pomp of a parade which would add nothing further to my perhaps over-demanding piety. Let this interlude be used to converse with you, dear friend, in sweet outpouring of the heart. Would that I could share with you all that I experienced in the way of consolation on this beautiful day devoted to Mary our Queen!

“I had not felt for a long time as much joy in speaking of her grandeur and in encouraging our Christians to put all their confidence in her, as during my instruction to the Sodality this morning. I can safely hope I was understood and I can well believe that all the faithful who came to our church this evening shared the fervour with which I was inspired at the sight of the statue of the Holy Virgin and greater still by the graces which she obtained from her divine Son, I dare say, while we were invoking her with so much affection because she is our Mother. I believe I owe to her also a special experience that I felt today, I will not go so far as to say more than ever, but certainly more than usual. I cannot describe it too well because it comprised several things but all related, however, to a single object, our dear Society. It seemed to me that what I saw what I could put my finger on, was that within her lies hidden the germ of very great virtues, and that she can achieve infinite good; I found her worthy, everything pleased me about her, I cherished her rules, her statutes; her ministry seemed sublime to me, as it is indeed. I found in her bosom sure means of salvation, even infallible, such is how they looked to me. Only one reason for regret came to diminish and almost entirely efface the joy by which I would fain have let myself be carried away; it was myself…” (Oblate Writings I, vol. 6, no. 86, p. 92-93)

That is what the Founder had to say about this event. His original letter has disappeared. This text comes to us from Rambert (I, p. 352-353) and from Rey (manu of his biography of the Founder written from 1886 to 1903) who copy it without commenting on it. There is no other allusion to this event in the letters of the Founder and in the correspondence among Oblates before 1861. We have to wait for another thirty years to see appear little by little in the writings of Oblates other details on this August 15 event.

In a July 15, 1889 report from the Oblate house in Aix, Father Prosper Monnet described the internal chapel of the Mission church at Aix with the altar of the vows and the “ancient Virgin which formerly smiled upon our venerated Founder and today still stands on her rich marble pedestal…” (Missions O.M.I., 27, (1889), p. 285).

In his work, Esprit et vertus du missionnaire des pauvres, C. J. E. de Mazenod, which appeared in 1894, Father Eugene Baffie listed some special favors received by the Founder and wrote: “The first one which Bishop de Mazenod related himself on August 15 [1822], but in veiled, mysterious terms, was the keen, invigorating intuitive impression of the marvels that God wanted to operate in him and by him. Did the Holy Virgin appear directly to her servant? Did she reveal to him concretely the future of his congregation? We may perhaps be justified in affirming this. What can be affirmed is that from that day on, Father de Mazenod knew clearly that his work came from God and was agreeable to God.”

From 1878 to 1903, Father Alfred Yenveux had many of the Founder’s letters copied in view of preparing his commentary on the holy Rules. In volume IV, p. 113-114 of his manu, the letter of August 15, 1822 is copied without any comment. In an article entitled, L’Immaculée Conception et la congrégation de la Jeunesse chrétienne fondé à Aix… which appeared in the 1904 Missions O.M.I., Father Emil Lamblin narrated the blessing of the statue on August 15, 1822 (He, like some others, mistakenly wrote 1823.), then he adds: “Oral tradition tells us that the statue opened its eyes and nodded her head in the affirmative while her zealous servant was asking for a favour. This extraordinary happening has never appeared in any report […] From that moment on, this statue to which all our older priests attribute this miracle was called the miraculous Virgin or yet again, the Virgin of the Mission or of Bishop de Mazenod.”

The statue, the altar of the vows and the heart of the Founder were transported to Rome after the religious expulsions from France in 1903. On June 8, 1908, Father Eugène Baffie, the vicar general, blessed the “family shrine” in the back part of the scholasticate chapel in Rome in which were placed these three important souvenirs of the Founder along with the statue of the miraculous Virgin. (Missions O.M.I., 46 (1908), P. 272-301). In his photo album on Bishop de Mazenod which appeared in 1913, Father Marcel Bernad referred to Father Lamblin’s narrative and added: “We do not know the basis of this tradition.” The tradition as handed down to us by Father Lamblin subsequently appeared several times in Oblate literature, especially in the testimonies of Father Edmond Dubois, o.m.i., and of Sister Veronica of the Sacred Heart of the Sisters of the Holy Family of Bordeaux given in the course of the ordinary process of the Founder’s cause in 1928 (Positio super introductione causae… Rome, 1935, p. 705 and 716), in the review La Bannière de M.I., Ottawa, 41 (1933), p. 31 in the work of Father Léon Hermant, Le Serviteur de Dieu C. J.. E. de Mazenod, 1936, pp. 64-65, etc.

The tradition has plainly enriched with details that which Father de Mazenod termed “a special experience that I felt today, I will not go so far as to say more than ever, but certainly more than usual. I cannot describe it too well because it comprised several things but all related, however, to a single object, our dear Society…” Oblate Writings I, vol. 6 no. 86, p. 93) This communication on the part of the Founder was made to Father Tempier who was always discreet beyond measure and certainly did not share with others this letter of the Founder. This letter, it seems, was found in Father Tempier’s papers after his death in 1870. In 1889, Father Monnet added the first detail: the Virgin smiled at the Founder; in 1904, Father Lamblin completed the deion by saying the statue opened its eyes and nodded its head in a sign of assent…

In a note on the Virgin of the miracle written up in 1956, Émilien Lamirande concluded: “We are totally justified in speaking of an extraordinary grace received that day. As for the “miracle” properly speaking, however, we have no choice but to relate it to a much later tradition that is rather uncertain […] Whatever one can say about this matter, this day of August 15, 1822 marked an important moment in the life of the Congregation and the fact remains that the statue before which our Venerated Founder returned to pray so often has become for us, as Father Rey says: “one of the most precious souvenirs concerning the origins of our family.” (Rey, I, p. 280)

On February 2, 1933, this statue which was in the sacristy of the scholasticate was transferred to the General House chapel on via Vittorino da Feltre. Since 1950 it is placed above the main altar in the chapel of the General House on via Aurelia.