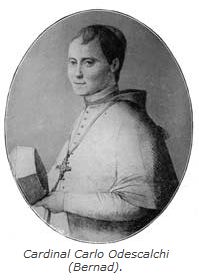 Carlo Odescalchi was born in Rome on March 5, 1786. Ordained to the priesthood in 1808, he preached parish missions. Created cardinal March 10, 1823, he was then appointed Archbishop of Ferrara. He returned to Rome in 1826 and was appointed archpriest of Saint Mary Major in 1832. He joined the Company of Jesus in 1834 and continued to preach parish missions. He died in Modena on August 14, 1841.

Bishop de Mazenod got to know Cardinal Odescalchi in Rome in 1832. It was this cardinal, prefect of the Congregation of Bishops and Regulars at this time, who consecrated him bishop on October 14, 1832. During his trip to Rome in 1833 for the Icosia affair, Bishop de Mazenod met with him a few times to discuss with him founding in Rome a seminary for the suburbican dioceses. In May of 1838, the cardinal wrote him to urge him to establish the Ladies of the Sacred Heart in Marseilles. On July 31, 1840, the Founder received a letter from a Miss Cornelia de Mellingen, a lady who had the ex-cardinal Odescalchi as her confessor. She must have referred to the ex-cardinal as “Father,” judging from Bishop de Mazenod’s reply to her in the month of August. “It is with pleasure that I learned that you have news of Bishop Odescalchi. I give him this title because, to my way of thinking, one can shed the cardinalate to become a monk, but which one has received the sacred character of the episcopate, one remains a bishop in God’s eyes for all eternity.” (French text: Écrits oblats I, vol. 20, p. 215)

Upon learning of the passing of Bishop Odescalchi, Bishop de Mazenod wrote in his diary entry of September 23, 1841: “It is from him that I received the fullness of the priesthood. The gifts that I received when I was consecrated were in some way an emanation of that same grace that inhabited his soul. In addition, I have never forgotten the intimate link that was forged between us by this communication and I have always judged myself happy to have been raised to the episcopacy by him…” (French text: Écrits oblats I, vol. 20, p. 259).

« Oblates of the Virgin MaryOzil, Firmin »