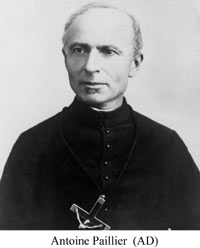 Antoine Alexandre Paillier was born on December 9, 1827, in Pompey, diocese of Nancy. His parents were Claude Paillier, distiller, and Anne Barbe Chardin. After his studies in the minor seminary of Pont-à-Mousson he went to the major seminary in Nancy. Having almost completed his studies there, he entered the Oblate novitiate in Nancy on September 7, 1848 and took vows there on September 8, 1849. Having completed a final year of theology in the major seminary in Marseilles, he was ordained to the priesthood on September 21, 1850 by Bishop de Mazenod in the major seminary of Aix-en-Provence. In 1850, Father Jean Marchal, moderator of scholastics, wrote: “Brother Paillier seems to me to be excellent from every point of view; application, punctuality, blind submission, devoted charity, these are his virtues. Joyful, lively, original, enterprising, he knows how to make others happy and to invent means of recreation. His piety is more sensitive than reasoned and is not sufficiently clarified. He feels endangered in the Congregation because be does not have enough to suffer and he has spoken to me at length about the Trappists. The same motivation has led him to ask insistently for the foreign missions.”

From Ottawa he went to the parish of Saint Peter, Plattsburgh, New York (1863-1864) where he was given special responsibility for the missions of Redford and Dannemora. He returned to Bishops’ house in Ottawa (1864-1865) and then became superior in Buffalo (1865-1868) and then pastor of Saint Joseph parish, Ottawa, while residing in the University (1868-1874). He was also superior in the University (1874-1877). Then he was pastor in Saint Joseph and chaplain to the Notre Dame boarding school (1879-1881) and also to the Good Shepherd Sisters (1894-1897). Afterwards he was professor of sacred eloquence in Ottawa major seminary (1894) and again chaplain to Notre Dame boarding school (1910-1911). While residing at the University he remained as confessor in the church of Saint Joseph until his death (1868-1916).

The author of his necrology note tells us that Father Paillier was an exemplary religious. He observed the Rule in its smallest detail and practised the religious virtues, especially poverty, humility and obedience. Throughout his life he was known for his “charming good humour, which was frank and cordial”. He died of pneumonia in Ottawa, after only a few days illness, on January 26, 1916. He is buried in the Gatineau cemetery.