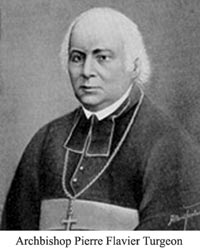 Pierre Flavien Turgeon was born in Quebec on November 12, 1787. He studied in Quebec seminary and was ordained to the priesthood by Bishop Joseph Octave Plessis on April 29, 1810. He immediately became secretary to Bishop Plessis and professor in the seminary until 1824. In a brief dated February 28, 1834, he was appointed titular bishop of Sidyme and coadjutor of Archbishop Joseph Signay of Quebec by Pope Gregory XVI. For sixteen years he shared the administration of the diocese with Archbishop Signay who left him plenty of scope to take initiatives, particularly in the area of education, the social apostolate and the administration of religious Congregations. He acted as intermediary between the archbishop and Bishop Bourget of Montreal, since they did not get on well together. On November 10, 1849, Archbishop Signay, since he was ill, entrusted the administration of the diocese entirely to his coadjutor. The archbishop died on October 3, 1850 and was succeeded by his coadjutor who then became archbishop of Quebec.

Archbishop Turgeon presided the first provincial council of Quebec in 1851 and the second in 1854. He also founded Laval university, reorganized the administration of the diocese, erected ten new parishes, etc. Following a serious illness, on February 19, 1855 he handed over administration of the diocese to his coadjutor, Bishop François Baillargeon. He died on August 25, 1857.

Relations with the Oblates who came to the diocese in 1844
Shortly after their arrival in the diocese of Montreal in 1841, the Oblates wanted to have a foundation in the diocese of Quebec where there were many vocations. Bishop Ignace Bourget of Montreal advised them to await a request from Archbishop Signay who did not seem to need missionaries. On January 4, 1844 Bishop de Mazenod wrote to Father Honorat: “I was well aware that the Archbishop would not get out of that state of apathy which is typical of his surroundings but I thought that his coadjutor would think differently.”

Some months later, in April 1844 Archbishop Signay wrote to Father Honorat, asking for some Oblates to whom he wanted to entrust the ministry to the Amerindians and the forest workers along the rivers Saint-Maurice and Saguenay and the North Shore of the Saint Lawrence River. The idea had been suggested to him by Bishop Norbert Provencher, Vicar Apostolic of Saint-Boniface and no doubt too by Bishop Turgeon, who had just returned from a pastoral visit among the missions of the Saint Lawrence Gulf.

At the beginning of May, Father Telmon went to Quebec with Father Pierre Fisette and they accompanied the diocesan priest, Father François Boucher on a three-month visit among the Montagnais Amerindians of Saguenay and the North Shore. The two Fathers were received in a most paternal way by Bishop Turgeon in the absence of the Archbishop. Afterwards it was mainly Bishop Turgeon who met the Oblates and corresponded with them, especially with their superiors, Father Jean-Baptiste Honorat, and Flavien Durocher after 1849, then with the provincials, Father Bruno Guigues and then Jacques Santoni after 1851.

In the month of May 1844, Archbishop Turgeon asked for a copy of the Oblate Rule. In June he invited Father Honorat to accompany him on a visit to Saguenay to entrust to the Congregation the mission of Saint-Alexis de la Grande-Baie from where the Oblates would minister to the Canadian colonists, the Amerindians and the forest workers. He assured them that he would look after everything and that the missionaries would want for nothing (letter of Father Honorat to Bishop Turgeon, August 26, 1844). Father Honorat and three Oblates arrived in Saint-Alexis on October 15, 1844. Fathers Médard Bourassa, Pierre Fisette and Flavien Durocher were to take care of the Amerindians and the forest workers while the superior would look after the parish of Saint-Alexis and from there he would work for the establishment of the colonists, purchase land for the building of churches and schools in the future parishes and fight against the dictatorship of Mr. McLeod, the representative of the forestry company of Mr. Price, and found the free agricultural colony of Grand-Brûlé.

He wrote frequent letters to Archbishop Turgeon and to the Oblate superior, Father Guigues. Beginning in 1845 he asked the archbishop to send him diocesan priests to help him and then to replace him in the new parishes because the Oblates were missionaries and not pastors. Archbishop Turgeon and Bishop Signay were not slow to pass judgement on Father Honorat whom they considered to be too enterprising and too aggressive. At first they asked him to be more conciliatory with Mr. McLeod and then they asked Bishop Guigues to recall him to Montreal. Father Honorat left Saguenay in 1849 and was replaced by Father Flavien Durocher.

From 1849, Archbishop Turgeon wished to have the Oblates take care of Saguenay, which included Chicoutimi where Father Gagnon was pastor. Bishop Guigues and Father Durocher, on the contrary, wanted to leave Saguenay and establish the Oblates in Quebec from where it would be easier to visit the colonists and the Amerindians on the North Shore. When making the canonical visitation of Canada in 1851, Father Henry Tempier decided to abandon Saguenay and to regroup the Oblates in Quebec which would permit them to live in community and according to the Rule, at least at certain times of the year.

Archbishop Turgeon insisted on leaving the Fathers in Saguenay and said that he could not easily find them a parish or a place to settle in Quebec. Father Jacques Santoni, provincial, called his council together in May 1852 and in February 1853 and he informed the archbishop that the Oblates would leave Saguenay and even the diocese if they could not have a foundation in Quebec. The archbishop said he was “disturbed” and confided his problem to Bishop Guigues and to Father Durocher. He was particularly anxious, as were the Oblates also, to leave them as missionaries to the Amerindians and the forestry workers. Finally, in March 1853, he allowed the Oblates to settle in Quebec, in the area of Saint-Sauveur, where they still minister at the present time in the important parish of Saint-Sauveur.

Bishop François Baillargeon, coadjutor to the archbishop of Quebec, was ordained bishop in Rome in 1851, with Bishop Eugene de Mazenod as assistant bishop. On February 23, 1866 he wrote to Father Joseph Fabre, superior general, to thank him for “the great and numerous services that your Fathers are giving in this diocese since they were first established here, services which they multiply day by day and which, I feel I must say, make them dearer to us, and make us want to keep them and see them become more numerous in our midst. I will refrain from mentioning the good works they have done in our good city of Quebec, in the distant missions among the native peoples of the North Shore and in our country parishes…” (Missions OMI, 5 (1866), p. 330).