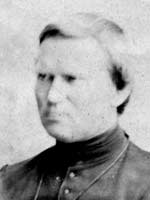 Joseph Hubert Zabel was born at Velaine-sous-Amance in the diocese of Nancy on March 2, 1825. He was ordained to the priesthood in Nancy on May 25, 1850. He entered the novitiate of Notre-Dame de l’Osier on July 1, 1857 and made his oblation there on July 2, 1858. In his notes on the novices, Father Vandenberghe judged him rather harshly at first: “more self confidence and fire than endowment with talent”; “a bluff straightforward personality; he is perhaps too careless of certain details and would find fault too roundly with things that require criticism,” “a niggling spirit…” Subsequently, at the end of 1857 and in 1858, Father Vandenberghe notices in this novice “a great deal of spiritual progress and in the improvement of his character.” He finds him “very edifying, displaying evidence of great virtue: restrained, humble and working at perfecting himself…, prayerful, dedicated.” He sent him to take part in a mission in February and finds that “he performed well.”

After his oblation, Father Zabel received his obedience for Saint John at Autun where he worked as a mission preacher, then as parish priest in 1862 and 1863. From 1865 to 1867, he was superior and novice master at Nancy. He took part in the General Chapter of 1867 as delegate for the province Nord. Appointed superior and parish priest at Notre-Dame de Sion in 1868, he held this post right up until 1878. Where there was question of his leaving in October 1876, the mayor and the faithful pleaded with Father Fabre not to take this priest away since he was “a model of zeal, dedication and especially of being a good Christian.” It was under his superiorship that work was conducted in extending the shrine and the monumental tower. In 1878, he received his obedience for Saint-Andelain where he preached missions and was parish priest “with a tireless dedication and a prudence which was the fruit of his long experience,” wrote Father Clement Merle in 1893.

Taken ill in 1893, he was replaced as parish priest by Father Bernard. Slowly, his memory failed him. In Missions O.M.I. of 1898, it is said of him that he was completely “reduced to a cipher. For us he is now only the object of compassionate veneration.” In spite of the attentive care on the part of the brothers of the house, he died on May 6, 1899.

Oblate General Archives: Oblation formula, July 2, 1858; three letters to Father Fabre (1867-1868), seven to Father Martinet and a few to Fathers Sardou and Tatin. Letters from the parishioners and the mayor of Saxon-Sion, October 23 and 24, 1876.