Fr. Roberto SARTOR, the treasurer of the General House, writes about the ongoing work of repair and remodeling at via Aurelia 290.

General House: The first part of the outside work on the entry side of the house has been completed with the installation of new windows, repair of the roof, and the façade completely redone and repainted. Now we are completing the second part, on the rear side. The scaffolding is still covering the façade for the new plaster and paint; the windows of the refectory, the Secretariat and the General Archives have been changed.

The Guest House: A new, large construction site has been opened at the Guest House, to remodel it, internally and externally, in order to be able to accommodate a religious community of Sisters who are expected to arrive in September 2016, to reside in this building for a period of 12 years or so. 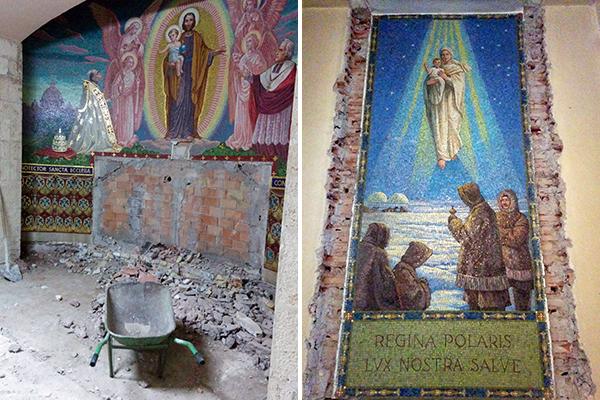 Crypt / Archive: In the large crypt too, after having been emptied of books and bookcases, there are major works in progress. So far, the work has focused on demolition to make spaces suitable and sufficient to become the seat of the new General Archives. We are trying to preserve the mosaics in the chapels that were formerly used for individual Masses and which represent images of Mary, Queen of the Oblate missions: at the North Pole, in the Philippines, at the Shrine of Pontmain, and especially the big mosaic in the apse, representing St. Joseph, St. Eugene de Mazenod and Pope Pius XII, the reigning pope at the time of the construction of the General House (1949-1950). During the work, we have made a lovely discovery which expresses how much the Congregation loved the pope: behind the altar of the crypt dedicated to St. Joseph, we found two large boxes filled with prayer intentions which the missionaries in Sri Lanka offered at the time of the golden jubilee of priestly ordination of Pius XII in 1949: prayers for his personal intentions from the schools, colleges and parishes.

The new financial year of the General Administration for 2016 will be the moment for assessing and planning the extent to which we can continue this project of restoration and renovation of the house.

Despite all these works going on, the life of the community, after the inconvenience of noise and abundant dust due to the change of the windows in the rooms and in the offices and in some common rooms, seems to hold steady, with its rhythm of studies, administrative services, conferences, meetings and various committees.

The virtues of fraternal charity and patience by everyone in the house help to maintain calm and peace, including for the treasurers who are always being put to the test.