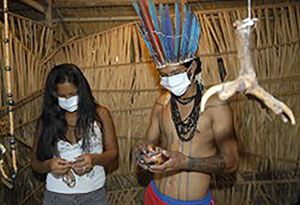 Still among the poorest of the poor…

Father Roberto VALICOURT, a missionary in Brazil’s Northeast for more than 50 years, tells us about the life of the indigenous peoples, known as “Indians”…

I need to remind you that when the Portuguese invaded (not discovered) the land of the Holy Cross, which they called “Brazil,” this land was inhabited by about five million human beings whom they called “Indians” because they thought they hand landed in the Indies!!! Turned into slaves, massacred, died of diseases brought from Europe that they did not know how to cure. In the 50’s, there were only about 150,000 of them left. Today, it is estimated that there are about a million of them in a population of 200 million Brazilians: a very small minority and treated as such.

The Indians live in tribes or communities in the forest or on the banks of streams and rivers, living by hunting, fishing and farming. But other than about a hundred groups who live isolated, refusing all contact with other Indians and the non-Indians whom they call “the Whites,” they are greatly influenced by city civilization through TV and cell phones. It is the city which is invading the “aldeias” (Indian villages)! 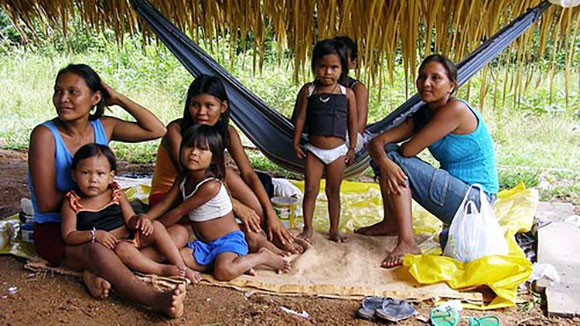 Many Indian families have abandoned their aldeia to come live in the city, in Manaus, in its suburbs or in the nearby rural zone. Why?

A member of the family becomes gravely ill. The presence of a doctor is difficult. There is no medicine and the healers don’t know how to treat the illness of the “Whites” (tuberculosis, cancer, hepatitis B, C, D). They have to go to the nearest town. But in these little towns, the hospitals are ill equipped. They have to come to Manaus. But an Indian will not be separated from family. They await a lasting solution, sometimes death. So they stay.

A young person wants to study. In the aldeia, the school offers barely a primary education. They go to the nearby little town. But for the university? Manaus! And the family comes along too and settles there.

The “Whites” invade the forest: looking for oil, for minerals of every kind, for wood; the forest is cut down for raising cattle, soybeans, corn for ethanol. The government has huge projects for opening highways and building hydroelectric dams. The river water is polluted and the fish are disappearing; game birds flee the noise of the machines. Climate change is producing floods and droughts never before seen. They have to leave. 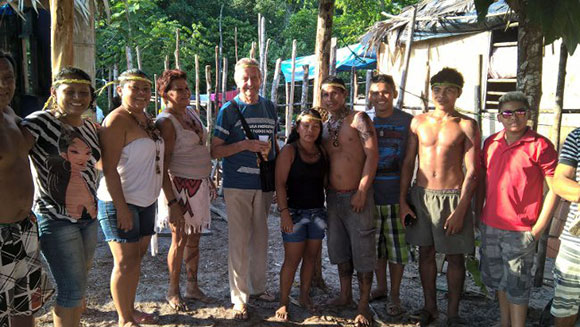 (…) In Manaus, there is no city policy for the poorest of the poor. They are rejected, the “discarded”! Those who arrived twenty or thirty years ago have built their shacks on the banks of a little stream that has become a sewer with the growth of the city. Some young people have managed to study and have become lawyers, nurses, managers, professors.

But they are a very small minority. The great majority who have not had this opportunity remain without work, or with little jobs that give no social advantage. The women make necklaces, bracelets, ear-rings, using fibers of the tucumã (a species of palm tree), and seeds which they look for in the nearby forest or which they have to buy. But where can they sell their products?

Many are victims of discrimination: “Father, aren’t you afraid when you go among the Indians?”

That’s why many of them deny their roots: “My father is Kokama, my mother is Apurinã, but me…I am not Indian.”

When I arrived in Manus in 2010, the auxiliary bishop encouraged me to work in indigenous ministry. But doing what? I had to plunge into this reality, totally unknown to me: a completely different culture from my own. One does what one can; love does the rest. The point of departure is visiting, getting to know, living with. We work in a team, with three lay Indians. We help them to organize and to form small associations. We need to save and enrich the culture. We have succeeded in getting elected a member of the Municipal Council for Culture. An indigenous woman is on the Municipal Council for Health. Another is a member of the National Council for Women. We are trying to get their knowledge of medicinal plants recognized, with the help of a professor of medicine at the Federal University of the Amazon. A missionary from Canada, specialist in indigenous languages, comes each year to bolster the knowledge of the indigenous professors.

The way the land is being occupied is favorable to the sects or Pentecostal churches and 80% or more are evangelical. We work with them with no problem, but Catholic communities are practically non-existent. Some families request baptism for their children and I celebrate Mass in some communities. But for now, that does not go very far. The different ethnic groups find it difficult to live together. We try to get them to meet and work together. It’s a real challenge. It would be important to have a cooperative of Indian artisans. For now, that has not worked. The youth are abandoning their culture and many either use or sell drugs. The men especially are given over to alcohol. One needs much patience and a well-rooted faith…

In spite of the difficulties and the many challenges, I am happy among the Indians of the city. We telephone each other. We work together. The missionary needs to penetrate the culture of the people he is serving. At Bobigny (a suburb of Paris), I had adopted the worker culture. In the Transamazon, I have learned to live with the “posseiros” (squatters). In Manaus, I am trying to graft onto myself the indigenous culture, so different from the others. In talking to a representative of the mayor’s office in Manaus, I was surprised to hear myself say: “We want a place where we can sell our craft products,” as if I too were Indian!